A Grade 9 learner from the Free State surprised the Applications Olympiad organisers by making it to the Finals with 13 matriculants.

The Applications Olympiad is aimed at learners who take the subject CAT (Computer Application Technology) – which is offered in Grades 10, 11 and 12 only.  Computer Olympiad Manager Peter Waker remarked,  “We are used to having participants from lower grades, and some of them do quite well, but this is the first time ever that a Grade 9 learner makes it to the finals.”

Albert Dreyer cannot yet take IT or CAT at school, but he is involved in an enrichment project at the University of the Free State.  The project entered him in the Applications Olympiad.

The Applications Olympiad challenges learners to use a Word Processor, Spreadsheet, Database or Presentation tool to solve problems.  Participants are mostly learners taking CAT at school or learners who have otherwise learned to use Computer Application tools using programmes such as the International Computer Driving Licence or IC3.

The Finalists for 2015 are (in alphabetical order by surname) 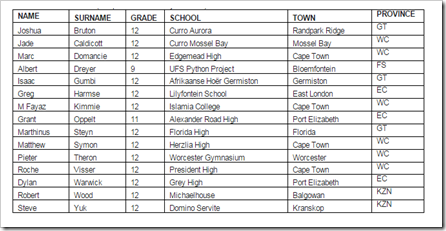 Roche Visser and Robert Wood have made the Finals for a second time.  Robert won a bronze medal last year when he was in Grade 11.