The Google Teacher Academy is not really all that well known in South Africa yet, but in countries like the USA, Britain and Australia, teachers who are interested in integrating the curriculum with technology clamour to attend. Just as Microsoft has its popular products and free tools, Google provides very useful programs such as Blogger blogs, Google Forms, Google Chrome with its huge selection of extensions designed to make browsing a dream, and Google Reader as a place to read all the blogs you follow – to name but a few.

So recently, when Google announced their next Teacher Academy in New York I decided to apply so as to find out more about Google. To my delight my application was one of the 50 that were successful!  Since then I have started learning more about Google! For example I hadn’t really got to grips with Google +, but as soon as we were accepted we were joined to a Google + circle to communicate privately with one another (as well as on the Twitter hashtag #GTANY which is more public).  The next exciting thing is that we were put into groups of 6 with a leader.

Our group leader is Lisa Thumann. The leaders also present sessions at the Academy. Lisa is from Kean University and judging by this photo in Google + she is quite entertaining. She told us that there had been 567 applications for this upcoming Academy. 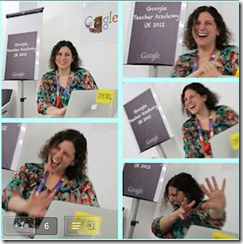 Another Google application I have recently been introduced to is a Google hangout! The seven of us had a hangout last week to get to know one other before the event and I can see that this is an amazing free future tool to use. 10 people at a time can participate in a video hangout. 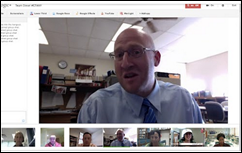 So once I am back on October 8th I’ll keep you posted in case you would also like to apply for a Google Teacher Academy and experience the rich community and inspiration that accompanies an event like this. Our SchoolNet webmaster has posted a Google press release on our website in case you would like to view it and find out more. http://www.schoolnet.org.za/.

Next up we have our summit Keynote from Craig Smith a guru in the field of autism, sharing why the future is inclusive his three big actions we can take.
#iPadAccessibility #iPadEducation @ThinkAheadZA @iSchoolAfrica