Coding is the new important language! Every school-going child everywhere deserves to be fluent in coding by the time they leave school. The post that follows tells of a great coding opporunity coming up and is taken from the Cape Town Science Centre’s website:  http://ctsc.org.za/africacodeweek/ 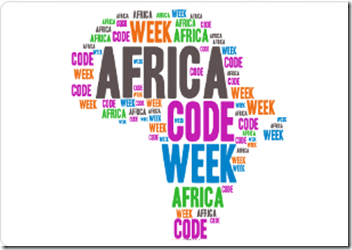 In 2015, we plan to host coding workshops for 20,000 kids and youth from 3 different age groups (8-11, 12-17 and 18-24) in South Africa, Angola, Cameroon, Kenya, Ivory Coast, Nigeria, Senegal, Morocco, Tunisia, Togo and Egypt. We are calling on governments, NGO’s, corporations, CSR departments and educational institutions to work together with us to deliver training workshops for teachers and actual coding workshops for children and students.

Africa Code Week will officially be launched during the World Economic Forum on Africa (Cape Town, 3–5 June) and a pilot event will take place at the Cape Town Science Centre from June 1 to June 4. Entirely free of charge, this pilot allows teachers interested in hosting coding workshops to be fully trained and children aged 8-11 to be among the first to engage in this continent-wide, historical initiative!

30-31 May 2015:  FREE Train the Trainer workshops for anyone with coding ability who would like to train others in order to organise and host events during Africa Code Week.

If you would like to take part in the pilot event, please click on the relevant link at http://ctsc.org.za/africacodeweek/  and complete the feedback/registration form