This is a guest post from Anthony Peters (@apeters522) who is an innovative English teacher from Parklands College in Cape Town. SchoolNet noticed his tweets about their English Department’s proposed Shakespeare QR code Scavenger Hunt Assessment activity with Grade 9 and asked  if he would be willing to share this with us as a guest post after the event. We’re thrilled at the result. Thank you Anthony!

The awesome English Department at Parklands College created an innovative and tech-savvy means by which to assess Grade 9s for Shakespeare’s Romeo and Juliet this term. Instead of sitting down to a formal one-hour test, the learners were assessed by means of a QR Code-powered Shakespearean treasure hunt! 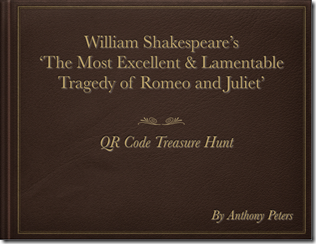 The main foci behind this initiative were: collaborative learning (encouraging group-based revision and problem solving), higher order thinking (discussion-based reasoning skills) and creating an exciting new way in which to promote learner interest by including various apps and technologies (Morfo, Keynote, QR Scanner, iPads and cellphones).

Shakespeare himself gives the rules

The lesson utilized a host of free versatile apps in order to encourage a deeper level of learner engagement and interest in the target matter. The learners were first told the rules of the treasure hunt by Shakespeare himself who came back from the grave after over 450 years with the help of the Morfo and Keynote apps. The learners were then given an answer sheet with a set of QR Codes that they had to scan with their cellphones or iPads in order to get photographic clues as to where to find the questions.

The QR Codes on the answer sheet showed the learners photos I had taken at specific locations around the school and saved online via Pinterest .

The hunt is on…

Parklands learners had to go to these places as quickly as possible and scan another set of QR Codes. This second set of codes contained particular questions (out of 25 marks) pertaining to the content, characters and themes of the Romeo and Juliet play. Questions included: “My only love sprung from my only hate.” What does Juliet mean when she says this? and “What evidence is there to suggest that Romeo is both effeminate and very masculine?”.

After scanning the QR Code questions and writing them down on the answer sheets, the learners had to rush back to their respective classrooms and answer all of them in groups before submitting their answer sheets at the end of the lesson.

This was an extremely fast-paced adrenaline-fuelled lesson which not only required learners to think very deeply about the intricacies of the Romeo and Juliet play, but also to do so quickly, work well as part of a team…and be pretty light upon one’s feet! As always, this initiative was extremely successful due to the unprecedented enthusiasm of the phenomenal Grade 9s! A large number of photos and full explanation of this new assessment will be posted in video format via Twitter so please follow me for more information (Twitter handle: @apeters522).

SchoolNet says:
Thank you for sharing this wonderfully interesting post showing an innovative method of assessment that was great fun at the same time. Well done to Parklands College!