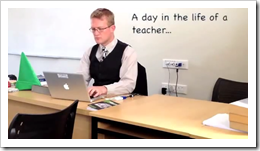 During 2013 Parklands College hosted the first ever Google Apps For Educate (GAFE) Summit in South Africa. During the final presentation the guys and gals from Google decided to punt the idea of the Google Teacher Academy to those present. Being recently ‘Googlified’ by various amazing presenters at that point, most of us were immediately enthused to go out and apply to attend the cutting edge training. After experiencing the two day summit and everything it had to offer, I could only dream of what a Google Academy would have in store for me. Promptly, I created my application: A few details filled in on a form and your application video. The video and the possible number of students and fellow educators seemed to be the tipping point for getting in or not. I had to throw caution and dignity to the wind and produce a video that shows creativity, my personality and involvement in my immediate surroundings as a teacher… well, here it is:

As you can see, it is not a masterpiece of cinematography and I am not expecting any Oscar nominations. However, it did get me into the Academy, one of only four selected from South Africa. 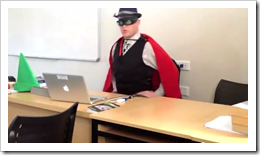 Passport… plane tickets… packing… and I was there. After taking a picture of the UK border (which you can apparently get deported for) and a few days of sightseeing, I entered the Google Offices in London alongside many other bright-eyed teachers, lecturers and ICT integrators. We immediately set to important business, breakfast! Afterwards, we were all gathered and again introduced to the idea of Moonshot Thinking:

We were then divided into groups, where I was lucky enough to be under the guidance of Carrie Anne Philbin (@MissPhilbin) an already qualified Google Certified Teacher (GCT) who achieved awards and accolades mere months after becoming a GCT. Quite the motivation! She also gave us each a hat (mine is yellow), already giving us an arbitrary advantage over the opposing teams.

The teams were used as think tanks as we moved between sessions, listening and being trained in various ways of Google Teaching. The topics that were covered included: the automation of our world using Google Scripts, using Google Sites to collaborate and create student portfolios, using Google Maps beyond finding your house, the layered nature of Google, Google Drive, Chrome and all the integrated features that Google has to offer. All in all, it was extremely overwhelming. I spent the entire time working on a Chromebook (a simplified laptop) which convinced me to move all my work to the cloud. Sessions and small competitions were held throughout the day to keep our brains processing and coming up with newer, better ideas. If you want to take a look at all the resources we received as well as all the resources offered at other GTAs, browse around the following link:

All in all, a whole lot of information was thrown my way! I processed as much of it as I could and tried to save as much of what I couldn’t process in a Google Drive or least the references to where I could look at them later. The Google Teacher Academy is not a gruelling course where you have to study and pass tests. None of us would have been there if we didn’t seek ways to improve our teaching for the benefit of our students. It is a place where motivated, enthusiastic and modern teachers share ideas. We were shown that the smartest person in the room was non-existent as the group’s collaboration was where the real intelligence existed. The room and  collaboration and the sharing of knowledge advances us far beyond what we could achieve on our own and at a much greater pace. If Google had a motto it would surely be along the lines of: Connecting people with information.

Cool apps, fun ceremonies, great guidance. The exploration of London in winter with other GCTs and even the incredible food found in the famous Google Kitchens could not detract from the one thing that every GCT carried away with them. A task… a mission… a quest to do something great in their world. Whether it is to train others, to use a specific app to redesign a lesson or the way you think, to creating a crowdsourced website where teachers and learners alike can get and share content at no cost, or setting the wheels in motion to start a Google University…the possibilities were, and will always be, without boundary.

At the GTA we were shown tools, familiar ones and mind-blowing ones! None of which were secret or exclusive. We were enthused to go out and use those tools with the purpose of making a change in our world. That challenge is for every teacher, every student and every person. Attending the GTA was a tremendous honour and an incredible learning experience. But, it does not exclude you from also making a difference in your world. I challenge every single person to come up with an action plan, a way to change their world.

The WCED would like to welcome the incoming Western Cape Minister of Education @DavidMaynier to the education sector.🙌 We look forward to your contribution to ensuring that we provide quality education for every child, in every classroom, in every school in the province.