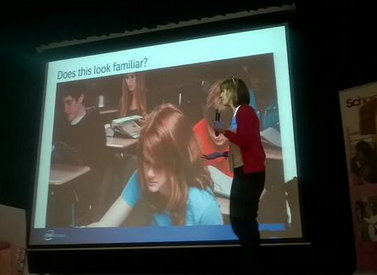 Shelley Shot (@sshott_shott) from Intel was the keynote speaker on Day 3 (3rd Juky 2015). She presented the closing plenary keynote. Shelley is well known to South Africans because she was the first Intel facilitator to visit us back in 2003 and has been a frequent presenter at our conferences ever since. As Intel’s Global Education Specialist, Shelley now drives the development and strategy for basic education around the world. A former middle school teacher and current university lecturer, Shelley understands the impact that quality teacher professional development can have. Shelley’s keynote was well received by delegates who had remained in force even though it was now late on the final day of the conference.

Shelley shared many gems with the delegates. She has shared her three presentations with us namely:

a) Rethinking the way we teach (keynote)

b) Mobiles in the classroom

c) Creativity in the Digital Age

‘Rethinking the way we teach’ by Shelley Shott from Schoolnet SA

Mobile phones in the classroom by Shelley Shott from Schoolnet SA

Creativity in the classroom by Shelley Shott from Schoolnet SA