Imagine receiving a phone call on the morning of the totally booked-out TEDxCapeTownED event on 16 June and being asked, “Would you still like to attend TEDx – we have a ticket for you?” Well, it happened to me, and I got there at lightning speed as excited as a kid in a candy store! What a worthwhile day it proved to be – with the words of movers and shakers in education pounding at one’s heart and leaving their mark.

Let me explain what a TEDx event is. The famous international TED talks are riveting short talks given by remarkable people on relevant topics. The TEDx program is designed to give communities, organizations and individuals the opportunity to stimulate dialogue through TED-like experiences at the local level. This particular event centred around education – 19 twelve minute talks by innovative thinkers in South African education.

There’s no doubt that education in South Africa has a long way to go and many of the speakers echoed this feeling. Solly Philander said of his now grown-up children, “I had to apologise to my children for sending them to school.” Now that might be taking things a bit far, but then Dr Mamphela Ramphele, who was introduced as someone who ‘says it like it is’, said our failed system has only one competitor… At that point she placed on the screen a picture of the sinking ship ‘Costa Concordia’. “Our education system is on the rocks,” she said. Sam Paddock painted a gloomy picture of Unisa’s distance education saying that it is ‘too distant’. Out of 300,000 enrolled students only 9% graduate. Professor Ian Scott from UCT gave alarming statistics of our Higher Education drop out rate. “Higher education has not come to terms with the needs of students”, he said.

But TEDx wouldn’t be TEDx if speakers left us drowning in the pool of doom and gloom. The picture IS marred, and many, many children have been lost to a poorly managed system but the innovative solutions that were offered by the speakers planted seeds of hope.

Here are just a few of the highlights that I noted. Brent van Rensburg spoke on ‘Your failures are our superstars’ and stressed how important it is for teachers to go with their students’ strengths rather than a one-size-fits-all approach. Students from his Zip Zap circus show illustrated his point with their amazing expertise and skill. Steve Sherman, the MD of Living Maths, related how a teacher once said to him as a child, “I think you should drop Maths”. Fortunately he didn’t listen!  Richard Malholland spoke about the different kind of career paths that await our students. ‘They will resemble mindmaps’. He caused a reaction from the audience when he suggested that degrees have a sell-by date of maybe five years unless certain requirements are met in professional development! Tim Noakes urged  teachers to become like coaches who “generate belief in themselves in the students we teach”.

John Gilmour encouraged us to concentrate on producing good mothers and fathers for the sake of society. At least two of the speakers suggested that  all graduates spend two years in community service teaching before continuing with their own career paths. Christopher Hagspihl has been doing just that, teaching Maths in a township school before continuing with a career in banking, and he spoke of the rewards of such an experience. Leigh Maynert who co-founded a business university at age 25 with no educational background spoke of nurturing the souls of students. TSiBA Institute has produced four Nelson Mandela Rhodes scholars in the last few years. Each and every speaker added their flavour to the pot as the day progressed. 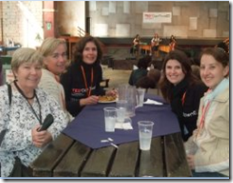 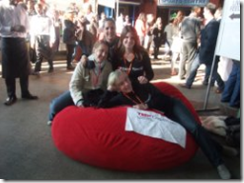 Judging by the tweets on the Twitter stream we all left inspired and refreshed by the ideas of others put forward during the day. It was the kind of day one wouldn’t want to have spent in any other way! It was also a day of connecting with old friends (like my TeachMeet buddies from Somerset West pictured above), and making new ones. But the question always is…What now? Inspired as we are by events like this, is it going to lead to any major change anywhere? Is government likely to listen? I guess the conclusion we are forced into adopting is that WE have to do our bit in society as transformative agents. It is actually up to us! Dr Mamphela Ramphele left us with these words, “We are ALL responsible for improving education.”

Note: If you would like to listen to any of these talks, the videos are now available online at http://www.tedxcapetown.org/videos

Candidates will be able to apply for the employment opportunities via http://SAYouth.mobi. This is a zero-rated mobisite that can be accessed through a mobile phone. Candidates without access to the internet can call 0800 727272, which is a toll-free number

Candidates will be able to apply for the employment opportunities via http://SAYouth.mobi. This is a zero-rated mobisite that can be accessed through a mobile phone. Candidates without access to the internet can call 0800 727272, which is a toll-free number