I have known about the storytelling tool Zooburst (http://zooburst.com/)  for some time, but this week it was brought to my attention again by Warren Sparrow from Rondebosch Preparatory School who sent me an example he had created. Zooburst is available as a webtool, an Ipad app and it seems that Android. is working on developing an app as well. 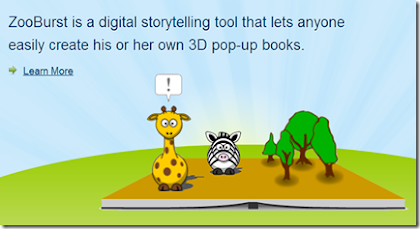 Zooburst is a fun, free,  3D pop-up book website that would be easy for a young student to use and in fact, useful for any age of student. It can be used for non fiction information as well as for stories, myths and fairytales.  Users create their stories using public domain clipart and Zooburst’s web editing tools. The Zooburst website describes Zooburst books as Augmented Reality 3D pop-up books.

1.Here is an example of a History project

2. This is an example of a book review

This was unfortunately too big in size to place on the blog but you can view his example on his blog http://wsparrow.blogspot.com/2013/11/zooburst.html

Visit the Zooburst Gallery to view some finished books.The Gallery showcases some of the amazing stories that have been brought to life by members of the ZooBurst community. Simply click on any of the images below to get started.

Zooburst is worth exploring don’t you think?