In the first part in this two-part report-back on Eduweek entitled ‘EduWeek16: a report back from Janet Thomson of SchoolNet – part 1‘ Janet gave an overview of Eduweek 2016. In Part 2 below

SchoolNet talks specifically about the Gaming in Education panel discussion at Eduweek 2016 where Janet Thomson was one of the panelists.

SchoolNet’s involvement in EduWeek in 2016 was due to the D G Murray Trust and our Learning Gains through Play project that precipitated an invitation from Intel to participate in a panel discussion on Gaming in Education. The objective of this Intel presentation was to

unpack as many diverse aspects of Gaming in Education in the short window that a panel discussion allows. The panel therefore included gaming experts from varied fields; Koos de Beer, Junior Lecturer, University of Pretoria, Andreas Cent Hadjipaschali, Director & CEO, Bravado Gaming (PTY) LTD, South Africa, Janet Thomson, Executive Director, SchoolNet South Africa, and Hitendra Hits Naik from Intel Corporation, South Africa. The discussion was facilitated by Ryan Macquet from Intel. Ryan started off by setting the scene around Intel’s involvement in education and then introduced the wider topic of gaming. He asked Koos to clarify the terminology by distinguishing between gamification, game-based learning, gameful design and serious games. Part of Koos’s explanation can be viewed here:  https://youtu.be/yzzbfHAzduM Ryan then asked Janet to outline the benefits of using gaming in the classroom which she did by describing the research that is being undertaken in the Learning Gains through Play project. Her reply can be viewed here https://youtu.be/gTSVpae2aP8  Janet mentioned that Microsoft had released
their education edition of Minecraft and that it was downloadable for free to
educators for three months from this link http://education.minecraft.net/

Koos then discussed
his unique use of Minecraft with his university students studying BSc.
Multimedia where they can earn rewards such as bonus marks and assignment
extensions by completing challenges that he poses.  However, the main purpose of requiring
students to undertake challenges in Minecraft was for the purpose of developing
a shared gaming vocabulary with his students once they have all played the same
game.  He highlighted the features of
Minecraft Education Edition that provides teachers will the tools to create
goals and set challenges for their learners.

Ryan introduced Andreas ‘Cent’
Hadjipaschali and asked how he had managed to grow his company, Bravado Gaming, into the
premier e-sports organisation in South Africa at age 29.  Andreas’s response and interaction with Ryan
is available here https://youtu.be/FOF4GcPb-Mw
He provided the facts around just how
big e-sports has become including it now being on DSTV Super Sport.   The panel discussion was concluded by Hitendra
Naik, the Director of Innovation for the Middle East, Turkey and Africa at
Intel who shared instances of gamification as applied in other industries and
made special mention of Intel’s commitment to gender equity with My
Digital Journey App for girls in Kenya and Intel’s She Will Connect initiative.

There
was time for questions from the audience.
The first question concerned game designers and their chances of
employment in the South Africa of the future. Koos gave a comprehensive
response which can be viewed here: https://youtu.be/T4uHyvGODRM.  The second
question concerned the likelihood of gaming becoming a regular feature of the South
African classroom.  Janet responded that
SchoolNet’s experience had not been encouraging because it had taken 4 years
since their first Xbox project before finding an education sponsor willing to
invest in gaming.  However she was
expecting that the very positive results from the current research into
Learning Gains through Play would be sufficiently encouraging for education
decision makers to sit up and take notice. Response  available here https://youtu.be/0SM4P9RH-PE 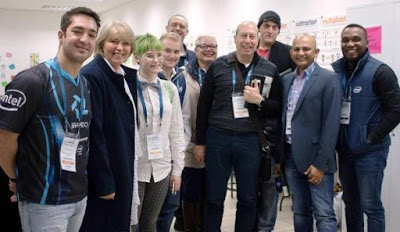 A press round table discussion
followed the presentation and a number of news reports have been published
already.  So it seems that the panel
discussion raised a good deal of interest around the role of gaming: