This is a guest post from one of our SchoolNet members,  Linda Foulkes, from Elkanah House High in Cape Town. Two of her students were chosen out of 8 Semi-Finalists to compete at the Microsoft Office Specialist Worldwide Championship in Washington for the World Title in July 2013. Jenny Cole, CEO of Netlearn sponsored the event and Linda attended as the trainer and chaperone. This post can be read in full with all the photos and videos on Linda’s blog Foulkes@Work

“I had an absolutely awesome trip to Washington, DC with my two Microsoft Office Specialist Champions who represented South Africa for Word 2010 [Shaun Nothard], and for PowerPoint 2010 [Tshimologo Molefe]. Shaun and Tshimo were chosen out of 8 Semi-Finalists [all eight from Elkanah House and the only Semi-Finalists in South Africa]. Both were sponsored a trip to Washington, DC to compete at the Microsoft Office Specialist Worldwide Championship for the World Title. Jenny Cole, CEO of Netlearn Update cc sponsored the event and I got to go as the trainer and chaperone. After a huge amount of preparation in the weeks leading up to our trip, we left SA on the 29th July.

“We met our sponsor, Jenny Cole, at OR Tambo as she flew in from Durban. After a two hour wait the four of us boarded the flight to Washington, DC. Eighteen hours later we arrived in Washington at 06h35 on the 30th July.

“Transport was arranged from Dulles Airport to the Gaylord National Resort in a black “pimp my ride” style SUV with a chauffeur.  The hotel was so huge, beautiful and very posh.  The boys shared a room and Jenny Cole and I the other.  The afternoon was spent literally touring around the hotel as it was so huge! Walked down to the waterfront area and found the American shop where some shopping occurred! Had the most amazing doughnut I have ever tasted!

That evening we were treated to supper on the waterfront after which we collapsed into slumber land.  On the Wednesday morning the boys and I could not wait to get down to the 4 course breakfast! OMW – to explain just would not suffice!

“Visit NetLearn Update cc – http://www.netlearn.co.za – to find out more information about the business as well as the News Flash on the MOS Competition. If you are interested in Microsoft Office Courseware, then visit this page to see my published courseware. 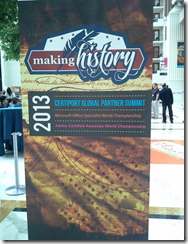 Certiport (http://www.certiport.com), a Pearson VUE business, is the leading test delivery solution provider for the global workforce and academic markets. Certiport hosted the event at the hotel. From the moment we met the staff we felt such a friendly, supportive and enthusiastic vibe. Everything was professional and organized so impeccably. They surrounded us with an awesome experience of competition, and incorporated history throughout our stay.

“The MOS Competition registration took place on Wednesday 1 August. Students collected their Certiport MOS backpacks and a few other goodies.

“On Thursday morning the candidates congregated in the student lounge to view their exam slots for each version of Office as well as for the Adobe Competition. Throughout the day, testing took place at the various conference venues. This portion of our experience was certainly extremely beneficial to us in order to plan for the coming years. The buzz, excitement and camaraderie outside the test venues were an involvement on its own worth travelling for.

We learnt so much from other candidates and trainers on the trip. Our children did wonderfully considering the time frame in which we had to prepare against other countries who have been in the know how for many years. We represented South Africa – AND were the ONLY candidates from South Africa to compete at the MOS 2013 Competition! The experience is a win in itself! Congratulations to my two students, Shaun Nothard and Tshimologo Molefe.

As a teacher and trainer I have benefited from a wealth of knowledge from other candidates and chaperons as well as from my two students [which could never happen in a classroom once a week!] We also learnt that we need to start working the moment we land for the 2014 competition and are very eager to explore and enter for the Adobe Competition.

The address from Microsoft at the Awards Ceremony to the children was outstanding. Please take a listen below:

“Candidates were all bussed to the mall around 09h00 am on Friday morning, after breakfast. All candidates and chaperons congregated for a group photo on the lawn before the Washington Mall group treasure hunt.  Mall maps were handed out, a $25 gift card for lunch or souvenirs as well as a MOS Championship T-shirt for everyone. The meeting point was at 19h00 at the Air and Space Museum.

“Certiport booked out the entire Smithsonian Air and Space Museum for exploration and dinner on the Friday evening. To end off the evening, we were treated to an IMAX movie. That afternoon, we spent 10 hours walking the Washington Mall!

“Video footage was taken of our two superstars! It was an honour for our two champions to be include in the 2014 Video Announcement for the Microsoft Office Specialist Worldwide Competition! Check out our Elkanah House superstars in the promotional video for the MOS Worldwide Competition 2014 in Disneyland! Cannot wait for next year having the privilege of experiences under our belt!

CONGRATULATIONS to you and your Elkanah House team, Linda. This is a great achievement and a wonderful opportunity for your students.