Boaramelo SS, Lekhulong SS, Concordia SS and Sehunelo SS are four schools that attended the Microsoft Help Desk course facilitated by SchoolNet. The trainer’s approach to the group was different to the way he usually conducted training and as a result teachers and learners paid better attention. This also created enthusiasm and a competition amongst the groups. Understanding the hardware is the chapter that most trainees enjoyed the most because the training was conducted in a classroom and participants were allowed interaction with most of the common hardware found in the school ICT centre. They were also shown some older technologies as well as some of the latest PC technology. Learners were also asked to perform the following activities at their respective schools. Compile the inventory of the computers in the computer lab, to draw up a rooster for the week and to design a ticket request for their schools. Examples were provided taken from the internet. They were encouraged to look for PCs that are not working at school and to try and identify the problems. All the learners performed the tasks and the trainer checked the work done and most of schools had done a very good job. The teachers were very excited about the information provided as it empowered them to solve problems they were already experiencing at schools. Supporting security need on the computer was explained and learners realized how they have been spreading viruses unaware at schools and at home by using memory sticks and not having proper protection for the computers. The facilitator demonstrated the installation of the database and then asked the trainees to do the installation themselves. The installations went smoothly. On the last day of the workshop about 2 hours was spent discussing and compiling an implementation plan for the individual schools. 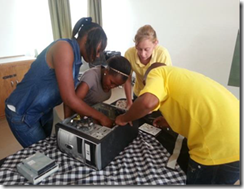