On Friday 24th April I excitedly made my way to Rondebosch Boys High to take part in a GEG (Google Educator Group) Meetup.

Google’s world-wide GEG initiative aims to grow voluntary groups of teachers in communities who will share their use of the various Google offerings with other interested teachers in their community. Here in South Africa our Google Educator Groups are growing steadily with a membership of 679 teachers since August 2014.  To date we have 12 GEG groups around the country. The GEG South Africa Google+ community  https://goo.gl/2fDXtN keeps a record of all the various groups and their activities. We invite you to join the community. 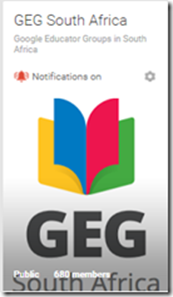 But back to the afternoon of Friday 24th April. This was the first Cape Town Central GEG group meetup since the group was formed in August last year. There were around 20 – 25 attendees and the programme was even better than the one advertised because it turned out to be a type of informal Demoslam (Google’s terminology for a TeachMeet where teachers voluntarily share ideas in short presentations with the rest of the group).  Chrome books were placed on the tables for us to share and explore.

Glen Jones, the Cape Town Central GEG leader who teaches at Western Province Preparatory School opened the meeting and shared about how their school is using Google Classroom. WPPs is using Chromebooks for some of their classes so Glenn showed us the workings of a Chromebook.  He also showed how they are making use of Google Classroom in a team manner with a class. One class can be shared between a number of teachers. There were a number of queries and ideas from the attending teachers about using Google Classroom as a group of teachers.

Andrew Hughes a Maths teacher from WPPS shared on how he uses Google Forms for Maths. There was discussion on how to use Flubaroo to mark Maths tests.

Rhine Adams who is new to WPPS is the Grade 2-7 art teacher and he shared how he uses Google products in Art. He also keeps his classes together using Google Classroom so that he can share interesting resources with the classes. The students can also share resources via Google Classroom. 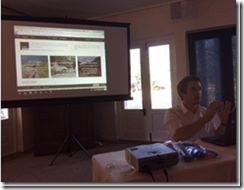 The students work from Google Drive with Apps that can edit images such as Pixlr editor. He demonstrated how to do this. He also uses Google Sites with the Grade 7s and often visits the Google Cultural Institute virtually with the students.

Leighton Forbes briefly showed us a site called http:// beterafrikaans.co.za which is great for Afrikaans teachers.

What I enjoyed about this Meetup was the way folk could ask their questions and different teachers would attempt to answer them, demonstrate or add their viewpoints. After the meeting we all networked and shared informally as we tucked into the beverages supplied and eats that were supplied.

The two GEG leaders for the Cape Town Central Community, Glenn Jones and Leighton Forbes, are considering holding these meetups on a regular basis incorporating the Demoslam method of sharing ideas, tips and tricks being used each time.