Submitted by Fiona Beal
Recently I had the great privilege of attending my very frst ISTE Technology in Education Conference in San Antonio Texas. It is said to be the biggest EdTech conference in the world!.  In South Africa a big conference numbers around 600, so to be thrust into the midst of a conference of 20,000 delegates inclusive of exhibitors, with well over 700 sessions and 150 additional workshops on technology trends, tools, and much, much more WAS quite overwhelming at times but always exhiliarating!  I thank SchoolNet for contributing to this trip and for giving me time off to attend. It was four days of professional development par excellence!

This is the first in a series of posts on what I learned at ISTE.  In this post I will express some of the wonder I felt at being at such a large conference. In the next post I’ll write a reflection on this unforgettable experience.

Where was ISTE held?

This year the Conference was held in the beautiful city of San Antonio in Texas. It is the 7th largest city in the United States, but it has a country feel with a river winding its way through the city, birds chirping happily in the trees as one walks along the roads, and exquisite flowers in full bloom everywhere. (My hotel was a ten minute walk from the conference centre.) The conference itself took place in the most enormous Conference centre I have EVER seen with a river running through the middle of it. Everything is bigger and better in Texas it seems.

I was sure glad to see these ‘Ask Me’ volunteers dotted around the Conference halls. I think they worked pretty hard directing everyone to the multitude of venues.

I loved the idea of an ISTE App to download on one’s tablet prior to the conference taking place. This had everything one needed to know on it including a conference planner. One thing that I found quite fascinating is that there were no rooms with computers in them at the conference. EVERYONE had their own device. One could book for three free BYOD sessions and any of the paid sessions. I avoided the paid sessions with the exchange rate between rand and dollar being so AWFUL but there were hundreds of free sessions of every kind to attend.

The organisation at ISTE was quite unbelievably amazing!  As a delegate from Africa you can imagine how awestruck I felt most of the time. Such a choice of sessions! These were some of the the unbelievable options:

BYOD workshops either paid or free

Start up pitches for new companies

Unconference on the day preceding ISTE

Events of all kinds

Actually there were many more opportunities than this…too many to mention! Basically one had to mark off a list of choices on the conference planner and make one’s choices before the conference started in order to stay on top of things.

I loved the photo walk on the first day where we explored the river walk area with a tour guide and pooled all our photos. This was such a highlight.

The three keynote sessions were such a highlight. One hard to start queing an hour or two before to get a seat inside the 6000-seater auditorium.  There were also viewing rooms allocated in different places. 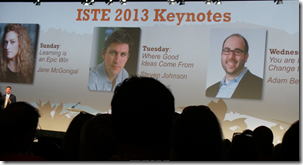 The opening keynote was from Jane McGonical on the gamification of education. Wow, this session was SO thought provoking. Jane McGonical quoted an enormous body of research showing how students learn from games in education and why. I’ll do a report back in another post.

Steve Johnson was the keynote speaker on the second day of the conference on ‘Where do good ideas come from?’. This session was very enlightening. He explored the concept of where and how good ideas originate. Drawing on examples from both inside and outside of education, he identified real-life learning environments that operate as incubators of creativity. He showed how innovative learners solve problems by borrowing ideas from multiple fields of thought, and how both educators and students leverage peer networks to mobilize as agents of change. Basically we learn from others and build on shared knowledge. 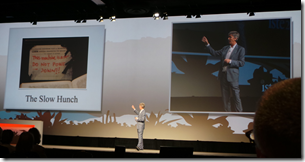 The enormously popular Adam Bellow, creator of Educlipper, gave the closing keynote where he invited us to change the world.’You’re Invited to Change the World.’ Adam showcased stories of inspiration from classrooms around the world and invited us to challenge ourselves to make a difference in our schools with creativity and kindness.Adam wore his Google glasses throughout his presentation! 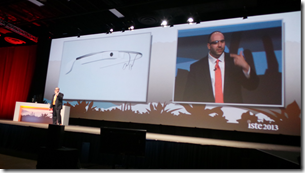 All three keynote speakers influenced my thinking enormously.  All three have published books.

The conference had a house band for the keynotes – an awesome band of students from some of the local high schools called ‘The Dara Niemi Band’. I just LOVED their music and their talent!   (And I bought their CD)

This is them singing one of their original songs.

Teachers can publish their technology passions in hard cover with ISTE! I think this is an amazing feature of ISTE.  There were all kinds of books written by teachers available at the ISTE book store – I was really tempted to buy some of them.

This was SUCH a popular spot at ISTE where folk could sit and chat, and meet friends and blog etc. Sue Waters from Educblogs organised regular blogger speakers at the Cafe. 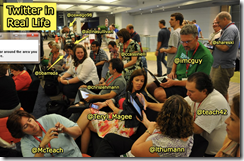 These were plentiful. I joined quite a few, my number 1 being the Digital Storytelling group and no 2 being the Literacy group. We joined these well before the conference and started receiving emails of events and happenings that would take place at ISTE. As you went around looking at the offerings of the different Special Focus groups and at the Expo, you collected ribbons to add to your name tag – there was a prize for the most ribbons at the end of the Conference – sponsorship to ISTE 2014! 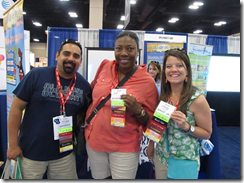 What a choice! You had to know what you wanted so as to rush there and get a seat. Sometimes there were lon.n.n.g queues. These are just a couple of examples of some I attended.

Of course this was a highlight of note! There were so many ‘big names’ at the Conference that it felt great to put names to faces to virtual names. On the Monday night I met up with some of the Microsoft Partners in Learning Institute group for supper, and later I met up with the Google Certified Teachers group….it was marvelous reconnecting with friends from all over the world. I loved attending the Ignite sessions where teachers were given five minutes and 20 slides to talk about something. Imagine how excited I was when one of the teachers from New York spoke about her global collaboration projects and mentioned how Karen de Stadler from Cape Town’s rhino project had captured the hearts of her students and had developed a life of its own right there in New York! Here are some of the friends I reconnected with:

Boat trip along the River Walk

I was lucky enough to be allocated one of the 40 seats in Powerful Learning Practise’s boat trip along the river walk on the Tuesday evening. It was just SO beautiful – another one of the highlights of the trip.

What an INCREDIBLE experience ISTE 2013 was. It was definitely worth the 2 days of tiring multi-stop air travel each way that it took to get there and back!  I’ll be writing a number of posts about this experience in the next couple of weeks, especially highlighting the amazing things I learned in some of the sessions. 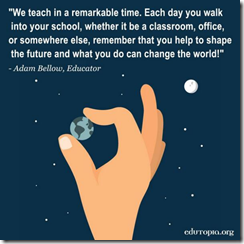