On Saturday 28th of March, the hills of Cofimvaba came alive with the sound of jubilation! After a whole year of intensive training and dedication on the part of facilitators and teachers alike, everybody (yes everybody-100% pass rate) graduated in grand style. This occasion was held at the Cofimvaba Senior Secondary hall and took the form of a banquet lunch. Representatives from the National Department of Education as well as the Eastern Cape Provincial Department of Education were present to celebrate our success with us. Apart from all the teachers completing

all of their compulsory badges, 58% of them earned merit awards which means that they have achieved at least half of the challenge badges as well. This reflect the enthusiasm that the teachers have shown. Even though they were under severe pressure towards the end to find the time to implement each badge strategy, they came through with flying colours and now own their tablets as a result of their hard work. 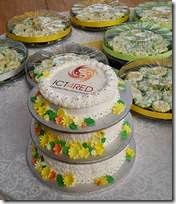 As part of the celebration we had a cake that represented each of the 3 phases and ICT4RED cupcakes to make sure everybody felt part of this success story. The hall was dressed up in celebratory banquet fare and there was an atmosphere of achievement and joy.

Each school was represented by a champion who was chosen on the basis that they were recognised by their peers as being a model of implementation and a support to their colleagues. They had to do a presentation of their favourite strategy and tell the story of how they implemented each strategy in their classroom and school.

There was lots of singing. The facilitators and the teachers composed various ICT4RED songs to show how they have enjoyed this intervention and the ST James choir did a wonderful rendition of our beloved anthem. This graduation has special meaning to all present and this is what some of the teachers, district and facilitators had to say:

Apart from all teachers receiving certificates there were fantastic prizes in various categories for individuals who have performed exceptionally well. Prizes included Sponsorship to attend the SNSA ICT in the Classroom Conference (flights from EL-DUR; accommodation, conference registration, meals), Dell Inspiron i3 Windows 8 Laptop (with office 2013), Samsung Grand Neo Plus Smartphone and Nikon Coolpix 20 MegaPixel Digital Camera. To read more about the winners: https://docs.google.com/a/schoolnet.org.za/document/d/1zSluVzumUSn8m8DXXpR8MQSF9kubV-j_VQJpof3b0iI/edit

Some of the moments that were captured on the day: