Submitted by Omashani NaidooEkukhanyeni High School won professional development training at Intel’s One Day Conference in KwaZulu Natal. Ms Hlengiwe Mfeka facilitated the training which was attended by 14 educators who were very enthusiastic and looking forward to learn.

The session started with introductions and the educators enjoyed the manner in which it was done. Each person was asked to give an adjective beginning with the first letter of their name which describes their character which was not known by others. This set the tone of the workshop.

Most of the educators had no computer skills and some with very basic skills so Intel Teach Getting Started was first facilitated. The session started with the first module on 21st century learning. Teachers were actively engaged in the discussions. At the end of module three which looked at critical thinking and how it can be incorporated into teaching and learning – one teacher commented that the first three modules served as a mirror which identified gaps to be closed by the course. Before the end of the session teachers were introduced to a four cycle process namely: plan, do, review and share. Those who had longed to work in a Word processor had a sparkle in their eyes when it was introduced in module 4. Most of the teachers were interested in creating a certificate. One challenge experienced was that the school used Open Office and the help guide for that version was not available on the CD.

The training proceeded by an introduction to the Intel Teach Elements course – Collaboration in the digital classroom. The course was introduced such that it was merged or linked with the discussions and or activities done in the previous day i.e. Module one and three – there was an overlap which made the session flow.

Teachers were taken through the course structure and the navigation of a course. Initially beginners struggled to find their way using the CD. The role of an Action plan was explained and how teachers would need to toggle between activities and the course materials. 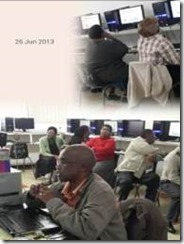 The facilitator encouraged activities that engaged and challenged teachers to reflect on how they teach in the classroom and learn from their experiences. Teachers enjoyed learning about developments in Collaboration (Forming, Storming, Norming and Performing) as they could relate to them. This prepared them to better understand collaboration in action in their classroom. Teachers were reminded to update their action plan with their collaboration goals. They were asked to share their goals with the rest of the group and individuals who seemed not to understand the task were assisted by other group members.

Teachers were introduced to five Collaboration Frameworks used when planning collaboration. Different activities including quizzes were shown to teachers so they could clearly understand each framework in depth and be able to implement it in their own planning. The activity on thinking about improving a lesson based on the Frameworks learnt was a huge challenge to teachers. Each teacher shared their plan and a peer review allowed constructive feedback – this worked really well.