Edmodo has become the Learning Management System (LMS) of choice for many teachers around the world. Edmodo is one of those Learning Management Systems that every teacher can successfully use in their classroom whether they have PCs, a BYOD classroom, an iPad/tablet classroom or just one computer/tablet in the classroom. It works across the board. Best is, that if a teacher so desires, he/she can even invite the parents to join  the class Edmodo group as well. All Edmodo needs, really, is an enthusiastic teacher that has access to a laptop.

Edmodo is a free web-based platform that teachers can use to manage their class, share content, access homework and other school items. It is also a safe social networking place for the students in the class to connect and collaborate with one another.  What the students like about Edmodo is it’s Facebook-like appearance. Students don’t need email addresses – they sign in via an access code.

I’m sure there are more features that I haven’t yet got to know.

Using Edmodo in the classroom

Here is a Slideshare entitled ‘20 ways to use Edmodo’

20 Ways to Use Edmodo from seyfert6

A cheat sheet that summarises Edmodo

This useful cheat sheet summarises Edmodo. Click on the image to be taken to the enlarged image 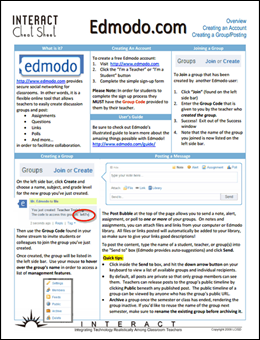 A full introduction to Edmodo provided by Russel Stannard.

Here is is an excellent video tutorial created by Russel Stannard in which he walks teacher through a step by step guide on how teachers can get started using Edmodo together with all of its features such as creating a group or class for  students, uploading files, adding comments…and many more.

Edmodo has a great Help Centre that has screencasts and tutorials to help you with any problem. See https://support.edmodo.com/home#entries/22460840-quick-guides-to-edmodo

1) Using Edmodo in the ipad classroom

Conclusion
Why not try out using Edmodo as soon as possible? You’ll be pleasantly surprised at how user-friendly it is.