At the start of the workshop Rodney Nissen, the facilitator asked teachers to reflect on how they have been using their own teacher tablets since the last workshop. A synopsis of positive, negative and interesting was compiled.

The positives were that learners were very excited about the tablet. One of the teachers noted that the most positive aspect was that they had been given their own tablet and this had been a surprise bonus. Another real positive was the rapid growth they had felt in their own technology skills. Teachers also voiced the feeling that they felt extremely positive and encouraging vibes during the training sessions. 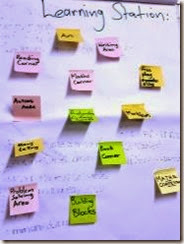 Module 4 is all about using Learning Stations. This is a classroom management concept that is already widely used in primary schools. The teacher plans different activities to happen around the classroom and allow for learners to have a variety of experiences. The teachers could think of plenty of examples that they are already using and listed them in a brainstorm. These included corners for: art, reading, Maths, fantasy, building blocks, acting, clay or play dough. Teachers even included some examples from previous modules of the Learning Gains programme such as storytelling and problem-solving. However, teachers soon started to consider new activities that included digital options. This is what the rest of the module was about. Teachers accesssed many other apps and games to try out as potential digital learning stations in their classrooms. These included: Aldiko ebook reader, CupCake Maker, Native Audio, video player and an origami tutorial. One group also made a water pump out of straws. Each group then demonstrated and shared what they had learnt at their station and reflected on their experiences by using the Learning Stations Evaluation in Kingsoft office on their tablets.

Peter started the workshop with a short exercise where teachers were asked to carry a balloon between them without using their hands and around a route mapped out within the training centre that included stairs. After much amusement during this exercise, discussions ensued around the characteristics of games and whether this was in fact a game. Teachers agreed that it was a game because even though Peter had never said it was a race, it did have rules and it was fun.

In order to consider how much learning happens through play, participants were asked to reflect on their own experiences of games as children at school. They soon found the Memoires App in order to record their reflections.

Peter then proceeded to show a video about James Gee who is a psycholinguistics researcher who used to specialise in acquired literacy but his current area of expertise is gaming and particularly how the principles of gaming can be applied to education[1]. One of the most interesting stories that the professor related concerned his first experience of playing the video game, World of Warcraft. He had started by reading the manual and was completely confused by the jargon and terminology. He decided to just play the game and soon found success. He recounted that sometime later he looked back at the manual and was really surprised that he had not been able to understand the vocabulary because now, having played the game, it was all crystal clear. The message that came across was captured in one of his quotes, “The problem with our schools … is that we give out the manuals without the games.” And of course he was not referring to actual games but to problem solving activities that need to be included in teaching for learners to unlock their understanding.

The Jig-saw activity that followed delved into the concepts involved in “learner-centred classrooms” – and the following four areas of expertise were explored: 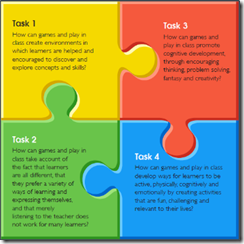 Teachers returned to their home groups and spent time discussing the key aspects of the learner-centred classroom in relation to the aspects discussed in the expert groups.

Then it was time to meet the Xbox Kinect. Themba Mabaso had spent the previous day setting up 6 Xboxes for groups to work around two training venues experiencing the different types of games. Some of the participants were hesitant to start with but soon became excitedly involved as they left their inhibitions behind.

Many of the teachers became exhausted with the more exertive games such as the sports games and adventure games. Peter saved the story game, Kinectimals, until last for all teachers to observe at the same time so that the concepts within the game could be explained and discussed.

Teachers then spent time classifying games and evaluating their appropriateness for their classes from the point of view of language, movement required, age appropriateness and whether it would appeal to their learners. The rest of the workshop was spent devising lesson plans to incorporate Xbox Kinect games.

Videos of the workshop are uploaded to the SchoolNet YouTube Channel here: http://www.youtube.com/user/SchoolNetSA/videos

More photos are viewable from the SchoolNet website here http://bit.ly/1omLbHw

[1] James Paul Gee, What Video Games Have to Teach Us About Learning and Literacy 2007 Macmillan