This is another guest post from Anthony Peters @apeters522 who is an innovative English teacher from Parklands College in Cape Town. In previous posts Anthony shared his very successful Shakespeare QR code Scavenger Hunt Assessment activity done with Grade 9 students, as well as Awesome Aurasma – teaching the different forms of humour to a Grade 9 class using Aurasma, ‘Vivacious Visual Literacy!’ An innovative assessment task for Grade 9 Visual Literacy and his innovative celebration of World Book Day, ‘Awesome World Book Day post by @apeters522 ’The Birthday Bard is Back…and this time he’s 450 years old!’ Thank you for your great sharing Anthony and Parklands College!

An inspirational idea for transactional writing

Transactional writing (particularly informal letters) can often be perceived as somewhat tedious things within many classrooms. It requires only the one language medium (written), as well as a small handful of structural and functional understanding. Understandably, this can be as tiresome as treading water, as boring as painting an already white wall white again, or indeed as painful as waking up in the morning and arriving at school, only to discover that it is a Sunday! 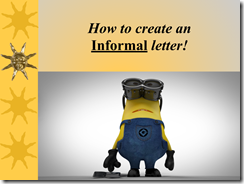 Therefore, the awesome English Department at Parklands College came up with a simple yet inspiring initiative for Grade 8s in order to revamp the ‘revampable!’ Instead of creating a series of letters as an individual assessment, I combined the ‘prepared oral’ and a wonderfully versatile free app called Tellagami in order to maneuver the monotony, refrain from restriction and engage the learners with some living letters!

After presenting and eliciting the standard parameters for informal letter writing, the learners were encouraged to produce their first and final drafts of their own letters over a few lessons.

The topics given were based on social examples including writing to a friend overseas, our yearly inter-school sports day called, Derby Day, as well as one involving the Grade 8 movie, War Horse. As far as the learners were concerned, that was the end of the assessment but far more was to be done! 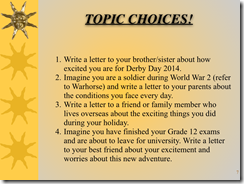 The learners were asked to list the differences (inclusive of advantages and disadvantages) between the written and spoken forms of communication, and thus initiated closer examination of the intricate complexities of human communication. Higher order thinking was encouraged here as the learners reflected on aspects ranging from intonation, structure, register, and spelling, to various diacritics like accents. After much discussion and deliberation, the majority of learners decided that the spoken form of language was by far superior due to the social cues one receives from fellow speakers (e.g. facial expressions, tone of voice, volume, pauses) which help reduce ambiguity. For example, depending on the writer, forms like ‘LOL’ can mean either ‘Lots Of Love’ or ‘Laugh Out Loud’ and if one is not careful, uncomfortable and embarrassing situations may result if the wrong one is used in the wrong social situation. One can imagine the unwelcome result of receiving ‘LOL’ via text message in response to a family bereavement! However, when speaking in the company of others, such ambiguity is unlikely to occur as often. The learners also noted that errors of spelling and graphology are rendered obsolete when one speaks, so that was one less thing for them to worry about!

Therefore, the learners were required to combine the spoken with the written all within Tellagami in order to demonstrate the importance of both communicative mediums. 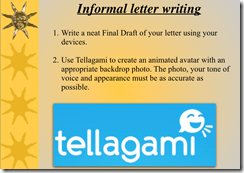 Firstly, learners had to download the app to their cellphones or tablets and then design their own avatar via the options available. Another fantastic feature of Tellagami, is that it is available on both Android and Apple digital devices.

Secondly, having discussed the importance of ‘context’ within all realms of communication, the Grade 8s were told to adapt the emotion and backdrop of their avatars in order for them to accurately reflect the context of their written letters.

And lastly, the learners had to record their voices reading out their letters onto their avatars and exporting them as short movie clips. As with the emotion and backdrop functions, they had to pay careful attention to their tone of voice, intonation and delivery in order to create an authentic context based on the content of their letters (e.g. if writing to a sibling about Derby Day their voices should seem excitable and enthusiastic). The examples that the learners created were truly phenomenal!

This simple task went further than the typical informal writing task and exposed the Grade 8s to the tiny but extremely important components of written and spoken English, as well as enforcing their understanding of what constitutes effective communication. The benefits to this task did not end there! Subconsciously, the learners made use of effective use of punctuation, and parts of speech in order to elicit the correct register. Therefore, this served as a form of enrichment and affirmation of holistic language skills.

With the help of Tellagami, the informal letters and the all-inspiring constructivist approach, some terrific material was created!

The following videos are posted on Anthony Peters’ YouTube channel:

SchoolNet says: What a great way to make informal letter writing come to life. I am sure the learners in this class LOVED the inspirational and exciting approach outlined in this lesson, using Tellagami.   Thank you again to Anthony Peters and the creative English Department at Parklands College in Cape Town for sharing this great post with us.