This report is given by Janet Thomson the Executive Director of SchoolNetSA in South Africa. The study used Microsoft Xbox Kinect gaming in a primary school in deep rural KwaZulu-Natal to investigate its effect on second language English Literacy. The results are extremely positive.

Research findings have just been released from a year-long study conducted by Mindset Learn and Verbeeks Education Specialists that investigated the impact that gaming had in improving second language literacy in primary school classrooms in Lakeside Primary in rural KwaZulu Natal. SchoolNet SA was commissioned by Microsoft to install Xbox 360 Kinect technology in each of the Foundation Phase classrooms and to assist teachers to effectively integrate this techology into their lesson plans in order to improve literacy levels. The research supports the premise that the effective use of innovative technology can impact on literacy levels of learners. 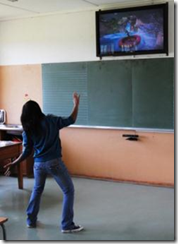 Over the December holidays of 2010, Microsoft commissioned SchoolNet to install six fifty-five inch television screens above the traditional chalkboards in six junior primary classrooms at Lakeside Park Primary in KwaZulu-Natal. These television screens were connected to the Xbox 360 Kinect gaming console. Teachers spent their January 2011 holidays becoming familiar with Kinect technology and devising learning experiences that were designed to engage learners and enhance learning. 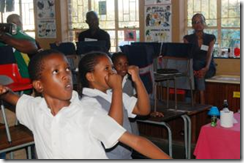 This Microsoft Xbox pilot project called for the development of specialist training materials for Foundation Phase teachers to focus on second language English acquisition for use with new technologies of this genre. The teacher training workshop that SchoolNet conducted in January 2011 encouraged teachers to mediate learning in relation to the curriculum while learners would be using XBox Kinect gaming technology. Lakeside teachers had already mapped out their schemes of work for the following year so for 2011 the new activities had to be infused into existing lesson plans. The course materials for this workshop were developed by Peter de Lisle of Hliton College, a former winner in the Microsoft Innovative Teachers Forum competition, who deliberately focused on language supportive pedagogy and grounded this within a specific approach to education, the learner-centred approach, which is of particular relevance to gaming because it requires teachers to do the following:

1. Create environments in which learners are encouraged to discover and explore concepts and skills;

2. Adopt an approach which recognises the need for cognitive development, through encouraging thinking, problem solving, fantasy and creativity;

3. Accept that learners are all different, that they prefer a variety of ways of learning and expressing themselves, and that merely listening to the teacher does not work for many learners;

4. Develop ways for learners to be active, physically, cognitively and emotionally by creating activities that are fun, challenging and relevant to their lives in the real world outside of the classroom;

5. Encourage motivation in learners through their own enthusiasm and involvement, and through creating activities which are naturally engaging. 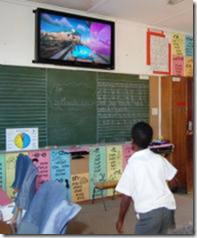 The dedicated teachers at Lakeside guided by their Deputy Head, Karen Kirsten and their Foundation Phase Head, Dian Ogle, readily addressed these challenges throughout the 2011 academic year and found numerous ways of enlivening the learning experiences that they developed for their classrooms. Teachers and senior management reported that learning through play is the most effective for this age group and that, “… this learning increases their intrinsic and cognitive understanding of aspects of the curriculum. The use of this gaming technology has aroused their interest and it has energised the classroom atmosphere.”[1] 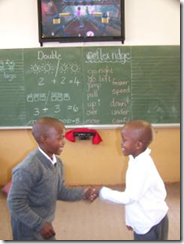 The reason why this pilot project chose to focus on improving second language English literacy was because the use of English as the language of teaching and learning (LOTL) is problematic in South Africa, a country with eleven official languages where low levels of English language competence characterise many rural primary schools. SchoolNet SA was commissioned by Microsoft to test the hypothesis that English language skills of primary school learners could improve through exposure to English while using Xbox Kinect gaming technology.

There are two language concerns at Lakeside Primary. Firstly there is a dissimilarity between the formal LOTL and the language used for social interaction. In contrast to formal language used in the classroom which in this school is English from Grade 1, the language used in the playground is isiZulu and this is mainly oral and informal. Secondly, and obviously, proficiency in formal cognitive academic language  takes longer to acquire than it does in informal social discourse. 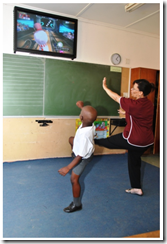 1. The evaluation for this project used a mixed method approach combining quantitive as well as qualitative instruments. One might be forgiven for assuming that the games played by learners could only affect their oral use of English and not impact on levels of reading or other literacies, especially as there is very little reading involved in the playing of most of the Kinect games. On the contrary the evaluators found that the reading age of all learners improved during the course of the year.[2] While this might be expected the study surprisingly found that it was not only the language and literacy skills of learners that improved but numeracy levels as well as their understanding of general knowledge were reported as having also improved. The study noted:

“There is a marked change in the levels of competency of the foundation phase learners. A comparison between assessment aggregates of 2010 and 2011 shows that there is a distinct movement of learners away from Level 1 (Not Achieved). This concerns both numeracy and literacy irrespective of grade.” [3]

2. Teachers who specialise in reading skills readily appreciate that the more opportunities learners have of hearing words and being able to sound them out aloud the more benefit there is for their actual reading skills. The evaluation report notes that some teachers who focused on phonics teaching at Lakeside were able to harness the potential of the technology, and noted that “increased word recognition filters into improved sentence structures which increases their self-confidence and eventually intensifies their willingness to read a book and join the library.” [4]

3. The researchers documented another finding over and above the impact on literacy by reporting that an increase in general knowledge assisted the learners to “unlock the curriculum”. The study found an that an important additional benefit of the Xbox was

“an increase of general knowledge of learners, a very crucial factor taking into account the socio-economic background and the limited access that most of these learners have concerning multi-media…. Through this improved general knowledge, learners gain a better grasp of what the content of the curriculum is trying to teach them.”[5]

4. The evaluation report further documents that teachers detailed “the enthusiasm that learners were showing for the learning process, their eagerness to improve their general knowledge so that they could understand the context within which the curriculum was implemented.”[6]

5. Kinect allows learners to play a variety of sport, “edutainment” and instructive games using body movements and voice. Unlike other gaming consols such as the Nintendo Wii there are no remote controls with Kinect. Instead sensors replicate motions via an on-screen avatar – the player’s ‘mirror image’. Teachers had reported that learners, especially shy learners, normally take many months to speak even in their home language whereas while playing the Xbox games within a short period learners were calling out without inhibition – and in English.

6. If a school has connectivity then the Xbox Kinect console allows the TV screen to become a normal internet browser that can be used for an infinite range of activities of educational value. The cost of an Xbox and a TV is not high when one considers that six classrooms can be equipped with Xbox Kinect technology for the same cost or less than one traditional computer lab.

7. The evaluation study records an overall marked improvement in vocabulary which in turn impacted on comprehension and overal literacy skills,

“The incorporation of the XBOX within the literacy curriculum focuses on improving the vocabulary of the learners. Through this improvement, learners can express themselves better which results in an improved comprehension which in turn influences the grammar and the sentence structure of the learners.”[7]

8. At the end of 2011 there was an announcement that National Geographic, Microsoft and Sesame Street had partnered on creating specifically tailored episodes of Kinect Nat Geo TV, and Kinect Sesame Street TV for Xbox Live. We are eagerly awaiting the arrival of these educational games in South Africa as we believe that they could further enhace the use of the Xbox as an educational tool.

Further needs for this project

SchoolNet South Africa believes that a courageous and innovative funder could make a significant impact on the educational environment in some of the poorest and most under resourced primary schools in the country by sponsoring the scaling of this Xbox pilot project to other schools. The impact on teacher and learner morale is immeasurable.