School Net SA conducts professional development workshops
as part of an initiative for the Telkom Foundation. Telkom is making meaningful
contributions to improving the quality of education in the Eastern Cape
Schools. School Net SA is conducting training in the course, Change
Leadership for Technology Integration with Senior Management Teams in 12
schools in the Queenstown area of the Eastern Cape. Facing Challenges is
one of the modules covered in September. Effective school leaders are key to
large-scale and sustainable education reform. 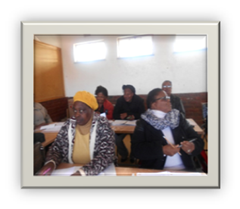 Leaders have a deeper and more lasting influence on their
organizations and provide more comprehensive leadership if their focus extends
over maintaining high standards.

Training was conducted by Mr M Rafu on 3rd of
September 2015. Sozizwe Primary school was chosen as a training venue as it was
central to the schools involved. The trainer reported that 41 participants
attended the training. The purpose of the module was outlined and the outcomes
of the modules were communicated with the participants. The trainer reported
that at first the participants were reluctant to share ideas about the challenges
they faced at their respective schools and this was part of the activity in
module 4.

After the trainer has explained the importance of the activity, the participants understood why they had to do the activity so that they come up with solutions. They realised that collaboration and sharing were the best approaches to solving problems. They were able to see the difference between technical challenges and adaptive challenges.

The trainer reported that he emphasised the plan of action as a conclusive stage in solving problems.They did another activity on embracing resistance instead of avoiding it. The teachers did a role play activity to rehearse situations in preparation for a future performance and to improve their abilities within a role. The teachers realised that as a change leader, you can view resistance to change as a problem, as an obstacle, as a negative and something to overcome, crushed or disposed of. However there is a positive side to resistance to change and, those who would lead successful change efforts, are well served by tending to resistance. Resistance to change is evidence that people care about something and want to protect it. So it can actually improve a change effort’s chances of success.

Please read the rest of this report on our website here https://goo.gl/QfOcLt :