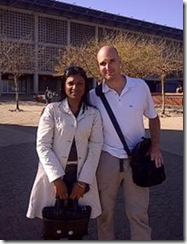 Zealand specializing in Criminal and Traffic law. After a series of uphill battles in New Zealand, Tudor wanted to do something to serve a greater purpose. He decided to create a Worldbook project called  ‘Touchable Earth’. SchoolNetSA was Tudor’s host in South Africa and on the right you can see him along with Omashani Naidoo from SchoolNet.

About the Touchable Earth project…

‘Touchable Earth’ is going to be designed as an application for tablets to provide engaging, easy, hands-on information for children in countries across the world. The aim of the project is to capture children in their authentic environments to showcase indigenous culture, schooling, friends and every day facts about the participating country.

Tudor has travelled to 14 countries in less than one month and has completed video footage and photo stories from Kurdistan, Romania, China, Nepal, Brazil and this week South Africa. Two schools in South Africa were visited and these were Lakeview Full Service Primary School in Soweto, Johannesburg and Isibongo Primary in Mpophomeni, near Howick in KwaZulu-Natal.

Lakeview Full Service Primary is in Dhlamini, Soweto. This school has been operational for 14 years and services the children from

Kliptown, Chris Hani and Slovo Park. Children walk in excess of 5 km each way and about 60% are orphaned and living with extended family. As a full service school, the Principal, Mr Victor Bilankulu (featured on the left) advocates that children with minor learning disabilities be included in mainstream learning. To assist with this task, the school has a dedicated social worker and has teachers with Remedial Education expertise.

The learners at this school have started a food garden through the Soul Buddyz initiative and are successfully growing lettuce, cabbage, cauliflower, spring onions and carrots. The school has a feeding programme for all needy learners.

The day started with the principal hosting an assembly with children singing and dancing. Tudor got to work with his sidekick/tour guide and chauffeuse, Ms Omashani Naidoo of SchoolNet SA and captured the learners in class, playing with friends and then visiting a child’s home so that he could get video footage of indigenous games played outside school.

All
grades stand in a semi-circular configuration during assembly – an idea shared
through an exchange programme with a school in Mauritius (top left).  Soul Buddyz club tends to the food garden
(top right). The Grade 4s
in their English class (left).

Isibongo Lower Primary School is nestled close to
the rolling hills of the KZN Midlands. When entering the premises of Isibongo Lower Primary School the first impression is one of a very well cared for school with neat flower borders and clean tidy classrooms. No children were visible outside and the sounds of singing practices were emanating from inside the busy classrooms. 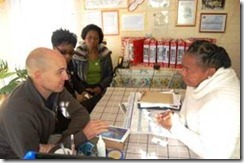 In the photo on the top right you can see Sibongile Mshengu – IT teacher from
Mpophomeni High School, Hlengiwe Mfeka from SchoolNet SA and the principal Mrs
Dudu Ndlovu. Hlengiwe and Sbongile had only been able to arrange the visit for the photo shoot by Tudor a few days prior to his arrival due to the school holidays. Fortunately Mrs Ndlovu the principal was very accommodating indeed and had met with Hlengiwe during the holidays. In this short space of time each of the classes had managed to create and polish their performances in a range of cultural dances and songs as well as traditional games and some public speeches about South Africa and Mpophomeni township itself.

First up were these young ladies below who sang a traditional wedding song.

Then it was the turn of Siphokazi and others to explain the features of the South African flag to the camera. 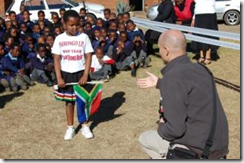 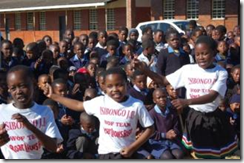 Tudor had asked for boys in traditional Zulu attire so gum boot dancers came next followed by the biggest 10 year old boy in the school – the “Zulu man” who was dressed for the occasion and who spoke extremely well on camera as well as providing some traditional dance moves. 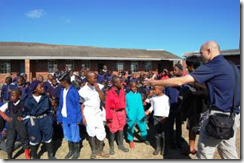 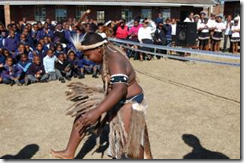 Traditional games
from the playground were up next and these ranged from skipping, hopscotch and
hand-clapping games to games with stones and one with cans.

Tudor also showed some of the learners other versions of
their games.  This one with stones being
caught on the back of the hand was a new challenge (top left). Below on the left you can see the children drawing out a hopscotch grid. On the right below you can see them kicking  the cans then stingers from the tennis ball while Tudor videos them at play.

Varieties of handshakes for different age groups were explored and videoed as were stories about friends.

In each country Tudor is filming children explaining the meaning of the symbols and colours on their flags – the children at Isibongo proved to be well versed in this knowledge and in this photograph were able to recite the name of the capitals of the country – although it did not seem logical to Tudor to have three separate capital cities. He was also surprised at the the size of the country’s population and the location of their township (Mpophomeni) in Kwazulu-Natal.

The
staff at the school had prepared traditional food for Tudor. He was presented
with a lunch consisting of tripe, cow’s head, Jeqe and patatas with Amawehu to
drink.

The final shoot was at the home of one of the learners – and the school had selected Siphokazi who had been the explainer of the colours behind the national flag. She is a delightful child who is very proud of her family and close to her grandmother, and she was able to express herself in English extremely well.

About the future of Touchable Earth…

Tudor is promising to have the iPad app, Touchable Earth available to the public in the next couple of months and to have it functioning with a selection of countries he has visited recently. He hopes to develop the content for the remaining countries during 2012. The really exciting outcome is that Tudor aspires to becoming the biggest donor of tablet computers to schools in Africa – we look forward to that day. You can find more photos on the SchoolNet photo gallery

SchoolNet would like to thank
the Johannesburg Central District, Ms Lizzie Shiburi, Mr Lefty Segenote, Mr
Allan Manual and Mr Jabu Tsotsetsi for their assistance and support in setting
up the visit to Lakeview Full Service. This is an amazing project
and we look forward to see the final outcome. Please visit Tudor’s Facebook
page to keep up with the progress of the project – http://www.facebook.com/touchableearth

The WCED would like to welcome the incoming Western Cape Minister of Education @DavidMaynier to the education sector.🙌 We look forward to your contribution to ensuring that we provide quality education for every child, in every classroom, in every school in the province.