Looking back at the 20th century

I’d like to invite you to join me on a journey. Let’s go back on our journeys of starting teaching. Mine started in the 20th century.  This is what I remember of my early years as a teacher. There were no computers, no Internet, no digital cameras, no ready to use movie cameras. It was very expensive to print photos from the old cameras, or to have cine camera videos developed. One certainly didn’t use a camera at school.

School was generally…boring especially when compared to today’s classrooms!

Computers introduced in the 20th century

Then computers were introduced into South Africa in the late 1900s. Their development was possibly slow by today’s standards. Below we see a five megabyte hard drive being shipped by IBM in 1956. 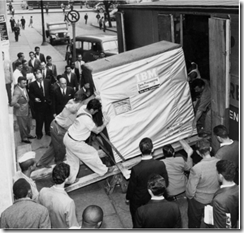 In 1989 something big happened. Tim Berners Leepublished a paper called ‘Information Management: A Proposal’ in which he married up hypertext with the Internet, to create a system for sharing and distributing information not just within a company, but globally. He named it the World Wide Web. The discovery of the Internet is one of the greatest inventions of mankind in education but it was a long time before it impacted education.

The biggest catalyst for educational change has probably been the advent of social media and the introduction of using mobile digital devices in the classroom. Mobile devices are part of the fabric of children’s lives today. They are seen as key to 21st century learning.  The growth of mobile devices has turned us into a connected, sharing community.

What is 21st century learning

The term “21st-century learning” or “21st century skills” is generally used to refer to certain core competencies such as collaboration, digital literacy, critical thinking, and problem-solving that advocates believe schools need to teach to help students thrive in today’s world. It marries content to necessary skills. We are preparing children for jobs that don’t yet exist. Never before could learning be happening the way it is now.

Teaching in the 21st century has untold potential for our learners. 21st century teaching and learning enables us to go further than one ever could before. Information is at our fingertips. Global collaboration is part of life. The paperless classroom is on the horizon.

Global projects: Instead of doing a paper and pen project students can join a collaborative global project.  In the process they learn about teamwork, plagiarism, citing information, commons images, critical thinking, deciding what to place on a plage, technical skills i.e. Google sites. etc

Team work: Students get to work with and communicate with students from other continents and cultures. They can explore real world problems.

Digital storytelling: Students can write beautiful online stories on the many, free online creative writing sites, and they can share these with the world.

This has been beautifully illustrated in the diagram below by Holly Clark. In the classroom, using digital devices, students can make their thinking visible,  they can use all sorts of quick digital sharing to give voice to their opinions and they can easily share their work. 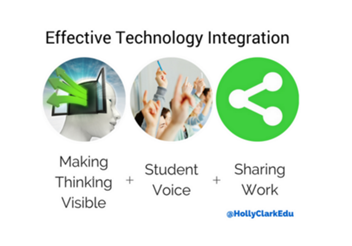 So enjoy the journey! Find out more! Collaborate! Network! This is one of the most exciting times for education.