On 24 March three teachers from different Midlands Schools drove through to Durban to make a presentation at the Microsoft Road show being held at the Durban Yacht Club. The objective was to demonstrate how teachers in the Learning Gains through Play project are using the Xbox Kinect in their classrooms. The Xboxes had been donated to the project by Microsoft SA.

The event attracted a number of KZN teachers as well as a range of Microsoft partners. Four teachers from the Midlands project schools had planned the content of their presentation although Nthabiseng Hlela was not able to attend the Durban.

The programme consisted of a range of presentations. Jaye Richards-Hill presented on the many and varied uses of Office 365 as well as a range of new digital tools for teachers that Microsoft has recently released.

Joyce was the main speaker for the Learning Gains through Play team and she started her presentation by saying that even though they had only had the Xboxes for a few months they had already seen an overall improvement in performance from their learners. Joyce also explained the configuration of the Xbox Kinect in the project whereby the games are projected onto a wall or screen while the learners who are playing the games may stand behind the sensor.

Joyce then summarised the benefits that she had noticed while using the Xbox Kinect with her learners: play is automatically learner – centred; slow learners had gained confidence, attendance had improved because none of them wished to miss out; learners disciplined themselves; Xbox games efficiently integrate across learning areas; our underprivileged children are exposed to the outside world; learners had become more focused. The Xbox also works well with a learning stations teaching methodology and no time needs to be wasted as learners move to take their turns with the Xbox corner.

Joyce showed slides with learners playing and enjoying themselves but also learning. Another big advantage she outlined is that teachers are able to understand their learners more holistically. 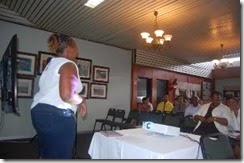 To illustrate this last point Thembisile Maphumulo told the story of a learner at her school who was partially blind but she had only discovered this by the child’s inability to follow instructions on the screen.

Thabisile Nyide then added to the list of benefits by summarising her experiences of the Xbox and what she had found the benefits to be: She listed the following: Encourages creativity, Develops young child’s problem-solving techniques and skills, Cultivates child’s intrinsic motivation, Regards the child’s active participation in the learning process as a major aim, Motivation gives the child the opportunity to develop positive self- concepts.

All three teachers thanked Microsoft for donating the Xboxes to their schools. They also thanked the D G Murray Trust for funding this three year project and SchoolNet for facilitating the process.

The remaining presentations included Karen Durandt from Vastratech, the agents for SMART interactive white boards. Her presentation mesmerised her audience because SMART has now developed revolutionary functionality and software that is specifically designed to assist teachers and learners and seems to have finally addressed the drawback with interactive whiteboards which is that lessons are inevitably teachers centred.

Other presenters included Brad Gerard from EDU365 who outlined how the school management software SIMS could vastly improve school administration.

The teachers from the Learning Gains project soaked up a great deal of new information about all the latest hardware and software. Their audience was additionally wowed by the images of Foundation Phase learners playing Xbox games in class and seemed to be surprised to hear that the games were helping learners achieve the skills prescribed by the national curriculum.