SchoolNetters will remember in July we reported about the development of a digital world atlas application for tablets that would allow children from around the world to teach each other about their own countries. You can read the blogpost here.  SchoolNet had become involved through Ed Gragert of IEARN (International Education and Resource Network). Now, the developer, Tudor Clee has made another flying visit to South Africa; this time to donate 10 Google Nexus tablets to each of the schools that took part in the creation of videos for the world atlas app.

Touchable Earth is an application for tablets that provides engaging, hands-on information for children in countries across the world. The project has captured children in their authentic environments showcasing indigenous culture, schooling, friends and every day facts about their country. Now it was time to test the app and find out whether it really is as easy and as engaging as everyone had hoped. 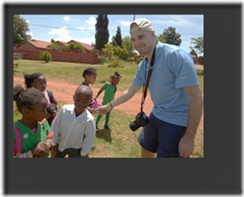 Tudor arrived in Johannesburg after a whirlwind sprint from Auckland via Sydney, New York and London. He sourced the hardware in New York and arrived at O R Tambo with 30 tablet computers as carry-on luggage. Once in Johannesburg SchoolNet’s Omashani Naidoo helped him source some serious antennae for boosting the internet speed to the schools and then spent many hours configuring the devices and loading Touchable Earth. They then sped on to Soweto, to Lakeview Full Service Primary school where Tudor donated 10 Google Nexus tablets. 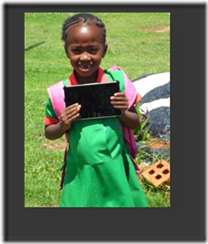 First off they had to ensure that the wi-fi was connected and was working. A Gauteng thunderstorm prevented installation of the antenna. However the router was installed and tested. Tudor and Omashani tested the connectivity and speed using Skype video conference. This connection proved stable for up to 20 metres from the principal’s office. One of the amazing anecdotes is a little boy who arrived to see Tudor talking via Skype and he was given the tablet to play with. He was awe struck that he could talk and see someone without physically being next to him. He kept looking behind the tablet for the physical Omashani. After playing on the Touchable Earth app he remarked, “I am going there to Nepal” 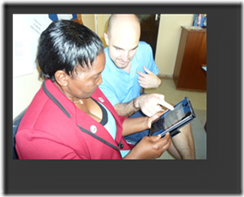 When the antenna was finally installed a download speed of 5 mbs was achieved. This is a phenomenally good speed and Tudor remarked that this is what he gets in New Zealand. Ms Elizabeth Shiburi, Deputy Chief Education Specialist in the E-Learning Unit of the Johannesburg Central District was on hand to receive Tudor and expressed her gratitude for connecting Lakeview to the world. 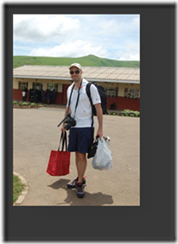 With his load a little lighter now, Tudor was able to fly to Pietermaritzburg and arrived at Isibongo Primary, Mpophomeni in the KZN Midlands carrying all the tablets, the modem and the rest of his connectivity paraphernalia.

Mrs Ndlovu, principal of Isibongo welcomed Tudor warmly to the school and was the first person to eagerly use the tablet, soon followed by other teachers and ably assisted by Hlengiwe Mfeka from SchoolNet SA. Mrs Nldovu expressed her gratitude on behalf of the school and the Department for the generous donation of tablets from Tudor. She promised to make every effort to ensure full use of the potential for these new devices.

As Tudor spent time with the handyman erecting the antenna outside, those children who had taken part in the filming for the South African part of the project, were called into the principal’s office to see themselves on video for the first time and to see how other children around the world would see them.

Gradually more and more children squeezed into the principal’s office to crowd around the tablets. There was delight combined with a little self-conscious embarrassment when children first saw themselves on video but before long they were hooked on exploring the lives of other children from around the world. They also had considerable interest in the footage of children from other parts of South Africa and were soon trying to replicate the dancing and the singing that they saw in the videos. Four girls quickly leant a song with actions about a butterfly that they watched being sung by a grade 4 learner from Nepal.

The learners occupied the principal’s office for hours and hours; some of the boys were eventually lying on the floor to carry on watching, listening and reading, simply because they were too tired to stand or sit in the same position any longer. At four in the afternoon the tired bodies were sent home after reluctantly handing back the tablets. The learners said they could not wait to get back to school next year!

Here is a YouTube video that Tudor uploaded to the Touchable Earth Facebook page.Tudor says, “This is Isibongo Primary School in Mpophomeni township South Africa. Touchable Earth with great assistance from SchoolNet South Africa and iEarn.org have just donated 10 Google Nexus tablets with Touchable Earth preloaded. The kids are seeing themselves in the videos as we made the program here. We are installing 3G Internet prepaid for a year.”

Further uses in the classroom 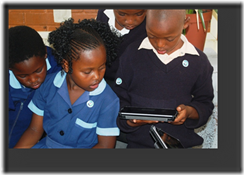 SchoolNet SA has worked closely for many years with all of the high schools in Mpophomeni and will now be supporting teachers at Isibongo Primary. SchoolNet has donated 25 netbooks to the Zenzeleni Community Centre for use by those primary schools in Mpophomeni that still do not have any technology. Hlengiwe Mfeka will be assisting teachers to explore other effective learning uses for the donated tablets – apart from using Touchable Earth.

SchoolNet’s tablet course for educators  has been developed

SchoolNet SA has recently developed a comprehensive course for teachers to help them use tablets in the curriculum and in their professional lives generally. The course takes teachers on a learning journey through the use of a tablet as an e-reader, a planning tool, a writing tool, a creator of content (using the camera and the recorder) as a communication tool, for research and assessment as well as an educational content provider. SchoolNet will be sourcing digital content and e-text books as well as allowing the teachers to join the SchoolNet Premium Membership programme that provides resources and peer support for teachers using technology in their teaching.

The potential of the tablets to revolutionise learning is well-documented in first world countries but the Touchable Earth initiative has given children in some of the poorest areas of South Africa the chance to participate in this digital revolution.

Although there are a number of countries already available and featured on the app, Tudor is promising to have Touchable Earth updated with more countries included over the next few months. He is leaving South Africa immediately to continue on his whirlwind tour to deliver tablets to children in other parts of the world. His next stop on Sunday will be Iraq.

You can link from here to more information about Touchable Earth

Take your presentations to the next level for back to school! ✨

These five tools make it easy to create well-designed and accessible content for any classroom. Learn how: https://msft.it/6018jGGs8

Yes, after an awesome conference opening, my first session today “Creative Coding with a Cause” is serving up a ton of great points and ideas! Loving the talk about the importance of collaboration and choice and the value of problem-solving skills. #scratchconference! 😸 https://twitter.com/scratch/status/1550134372266741760