In its 14th year currently, the 2015 Microsoft Office Specialist World Championship (MOSWC) attracted 600,000 unique candidates who competed to demonstrate their mastery of Microsoft Office products. 145 student finalists from 47 countries participated in the final round of competition.

“More than 1.2 billion people use Office worldwide, and these students have taken the time to set themselves apart as the best of the best,” said Alison Cunard, general manager of Learning Experiences at Microsoft. “Earning a Microsoft Office Specialist certification has already provided proof that they have the necessary skills to succeed in academics and the workforce. Winning the World Championship puts them in a class of their own, and we look forward to seeing how they put their Microsoft Office skills to use in the future”

So, why not think about entering the 2016 competition next year and visit Disneyland for the world championships.  You can read about last year’s winners here: 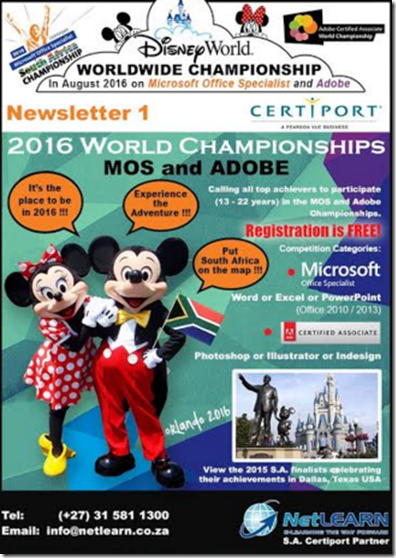 SO, YOU ARE PROBABLY WONDERING HOW TO ENTER?

To participate, a student must submit a passing score on any of the following certification exams:

A student may enter in one, two or all three applications from a MOS track [only applicable if the student has not entered before].

NetLEARN OFFERS FREE WORKSHOPS TO EXPLAIN AND COACH STUDENTS ON THE ENTIRE PROCESS OF ENTERING AND WHAT TO DO IN ORDER TO ACHIEVE!  CONTACT US TO PUT YOUR NAME ON THE LIST FOR 2016.

CONTACT LINDA :  linda@netlearn.co.za for more information or any questions regarding participating, certification or training