We have two SchoolNet webinars coming up on the topic of Gaming in the classroom’. We are very pleased to announce that we have two distinguished overseas presenters for these webinars, Arjana Blazik from Croatia for the first one and Bram Faens from Belgium for the second one. 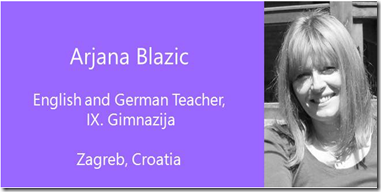 Arjana is well-known in many different international circles. I met her at the world finals on the Microsoft Innovative Teacher competition in Cape Town in 2010 where she represented Croatia with her winning project entitled Greetings from the World. After that I met Arjana again at the inaugural Partners in Learning Institute in Seattle in July 2011. Since then Arjana along with Bart Versvijel from Belgium have been involved in running four online Internationl Teachmeets as well as a number of online activities for the European SchoolNet’s e-twinning project. You can read Arjana’s blog at http://traveloteacher.blogspot.com/ Arjana has been featured on Anthony Salcito, Vice-President of Microsoft’s blog, Daily Edventures as a global Education Hero – read about her here: ttp://dailyedventures.com/index.php/2012/06/28/arjana-blazic/. Arjana has a great interest in games in education and was privileged to attend a European workshop run by Ollie Bray from Scotland (who is known as THE games in education person).

Bram Faems from Belgium is another educator who is well-known in International circles. I first met Bram at the Partners in Learning Institute in Seattle in 2010. Last year Bram was first the begium winner and thereafter the European winner of the Microsoft Innovative Teacher competition, and he represented Europe in Prage in November 2013 with his project that involved Stop Motion movie making with his class. You can read about Bram in his blog http://www.leesvoer.be. Bram has been featured on Anthony Salcito, Vice-President of Microsoft’s blog, Daily Edventures as a global Education Hero – http://dailyedventures.com/index.php/2012/07/02/bram-faems/. He has also been honoured by the Queen in belgium for his innovative teaching.

Bram is a keen user of games in Education.

Details of these two upcoming webinars

1) Spice up your classroom with games (Arjana Blazik)

Summary:In this webinar we introduce educational games as a means to engage learners and to create an inspiring learning environment. You’ll be shown how to integrate playful learning in your classroom and how to motivate students to create their own games. Not only that, but we also want to encourage you to become a game designer and create engaging games which will help your students develop their 21st century skills.

Access: Anyone who has the URL for the meeting can enter the room

Summary: Variation in teaching methods keeps students “awake” and concentrated. Playing games and quizzes can be a nice variation on the traditional lessons for your pupils  But what about taking it a step further? Why can’t students create a quiz about a lesson subject or even code a game? In this webinar you’ll hear Bram Faems talk about creating quizzes in PowerPoint and how to playfully teach young children the basics of coding with Kodu Game Lab

Access: Anyone who has the URL for the meeting can enter the room