Submitted by Fiona Beal
Earlier this term, whist researching on the Internet, I cam across two posts on adjectives that fascinated me. The first was a post in a Grade 3 blog (Mrs Truter’s Third Grade) showing two photos of an activity on Adjectives  http://goo.gl/2BtmFo (see one of the photos on the right). The second post was a video on the use of adjectives in descriptive writing found at http://goo.gl/OmZ77H  This gave me the idea of doing something similar to both of these posts with a Grade 3 class and including technology (see photos below).  The students enjoyed the activity so much that I decided to write a blog post about it.

Lesson idea
The Grade 3 students find at least 20 positive adjectives relating to themselves. They present these creatively using PowerPoint where the skills of font choice, font size and colour are emphasised, They discover how adjectives used in writing make writing come alive and write a descriptive paragraph about themselves using as many of the adjectives as they can.

Step 1: Create a template for the students to use

I figured this could be created on two A4-size pieces of paper joined together with a piece cut out for the head. I created the template idea for the students to copy in PowerPoint.

Step 2: Explore adjectives with the class and how they can be used in descriptive writing

The next step was to talk about the importance of adjectives in writing.  We revised the meaning of adjectives. I read the class a very plain paragraph that had no descriptive words and asked them to draw a quick picture using a drawing programme they were familiar with (in this case Paint). All the pictures were different. Then I read the same paragraph but this time with lovely descriptive adjectives and asked them to draw the picture. This time the pictures were very similar because the adjectives had led a much clearer image being imagined.

Step 3: Brainstorm positive adjectives that can be used to describe other students in the class.
We now had a brainstorming session on adjectives that could describe others in the class. The instruction was that the class should use only positive words but that no names should be mentioned.  As the students called out words I typed them out and displayed them on the screen via the data projector. These were left on the screen as prompts for words during the remainder of the activity. 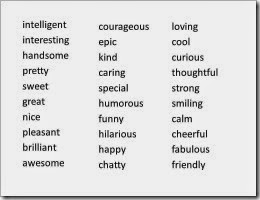 Step 4: The students think of 20 adjectives to describe themselves and fill them in on the provided template

Since the school I volunteer at uses Windows computers we used PowerPoint for this lesson. However Keynote on an iPad or a Google Presentation on an Android tablet would have done the trick as well.

Step 5: The templates are completed and printed

As far as technology skills are concerned this was a good way of working creatively with font types, font size, colour and font position. As far as using adjectives is concerned the students enjoyed thinking of positive words about themselves.

Step 6: Print the templates, cut out the head space, glue the two pages together and draw hair using regular crayons

Here is a photo of some of the final results of this activity. 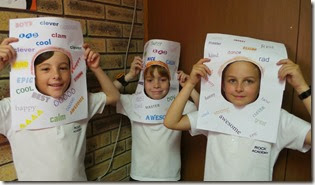 Step 7: Create a description of oneself using the selected adjectivesIn the next lesson this part of the lesson would be tackled. The students will use the adjectives to write a descriptive piece about themselves.