Submitted by Fiona Beal
Have you heard of this free, live streaming app called Periscope? I have just downloaded it to my Samsung phone and can’t want to try it out.  This live streaming video app was purchased by Twitter and it made its debut March 26, 2015.

Why would one use Periscope?
Periscope allows you to “go live” via your mobile device anytime and anywhere. You almost become a live broadcasting station, streaming video and audio to any viewers who join your broadcast.

Can a Periscope broadcast be saved?

Once a broadcast is over, others can watch a replay, and even provide feedback, within Periscope for up to 24 hours. After that, the broadcast is removed from the app. HOWEVER, the good news is that each of your broadcasts can be saved to your mobile device and, once you’ve got it there,  you can publish it online just like any other video.

How Do I get started with Periscope?

3. Make your choices:
You can see

How to create a broadcast

To start broadcasting you hit the camera button on the bottom navigation bar, enable whatever needs enabling, fill in a title/description of your video and hit “start broadcast”. By default, all broadcasts are initially public for anyone to see, unless you adjust the settings.

Interesting features of Periscope
Map View: You can explore the videos being broadcast in different parts of the world through the interactive map feature. This allows you to search for videos by location and find streams of particular events taking place. 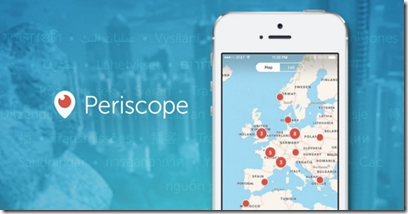 Interactive viewing experience: Aside from just watching video streams, Periscope allows for real time interaction. Viewers can click on the screen of an incoming broadcast – “heart” the streams they like and send hearts. They can also interact with the person streaming the video through the comments/chat function.

My own experience of Periscope

I tried out this app yesterday for the first time as part of  #projectamazinggrace where Christians worldwide were singing ‘Amazing Grace’ together at exactly the same time. I used Periscope to make a live broadcast which will be available globally for 24 hours. I did a few things wrong such as a spelling error in the title, and forgetting to add location in the settings so it could be added to a global map – but it worked!  It exports on Twitter and Periscope. Here is a screenshot. (Periscope uses the portrait view) 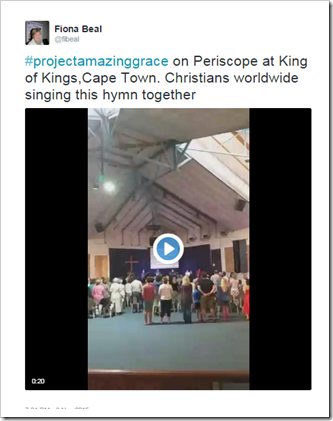 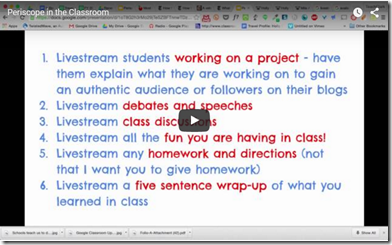 So, give Periscope a try! It is another game changer!