Let’s be honest – there are many times one wishes one had more characters than the allocated 140 to compose a specific tweet. Well, have you heard of Tall Tweets? This is a phenomenal site! Tall Tweets (http://talltweets.com/) is a Twitter app that will help you write tweets that are longer than 140 characters. It can also also publisher longer tweets as images. This exciting app was developed by Amit Agarwal of Digital Inspirations 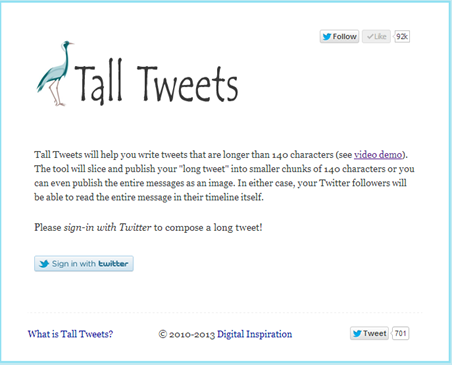 How does it work?

There are two things that Tall Tweets allows you to do in order to post longer tweets:

a) Say you have quite a bit to say – much longer than 140 characters. Well, the tool will slice and publish your “long tweet” into smaller chunks of 140 characters or less. It then publishes them all to Twitter in a sequence. The tweets are numbered and are sent in a reverse arrangement such that they can be read from top-to-down inside any Twitter client. Sounds complicated, I know, but the main thing is that your Twitter followers can read your entire tweet as one tweet!

b) The site will allow you to publish the entire messages as an image. In this instance the entire text gets published in a single tweet and your twitter followers can once again read the whole tweet. 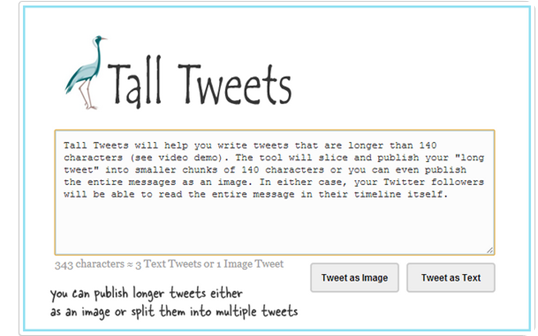 How do you get started?

If there are hyperlinks in your tweet, they’ll be automatically shortened using bit.ly.

Watch this video demonstration from Amit Agarwal of Digital Inspiration who created the site.