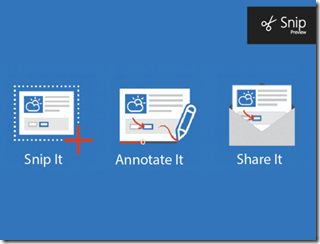 Have you heard of Microsoft Snip? Snip is a standalone app that lets you add your voice and doodles to screen grabs. Let me tell you about it and then show you how we use it in the classroom.

Microsoft Snip, available in beta now, allows Windows users to capture screenshots and then annotate on them and record audio over the top. It can turn an ordinary screenshot into a screen tutorial, or you can just share your thoughts about a document or image over the web. Snip has a built-in recording feature that allows you to add voice recordings as you annotate. Recordings are converted into video files that you can share via email, link or get in an embeddable format hosted by Microsoft.

How do I get Snip?

Snip downloads to Windows 7, 8 and 10. Go to https://mix.office.com/Home/SetupSnip and click on download. A window opens and the download begins. Once downloaded install Snip to your computer.

How does Snip work?

1. Once installed it sits in the middle of your screen waiting for an instruction. It is a floating toolbar so you can move it around.

2. Click and drag around a section to capture any window or area of your screen. Let go of the mouse and you’ve got your screengrab. 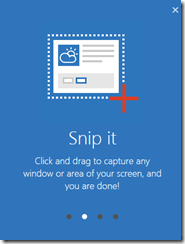 3. The screen editor opens and gives a large selection of tasks. 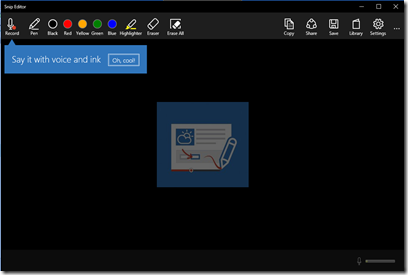 4. You can annotate on it or narrate your comments and draw on your snip with digital ink. 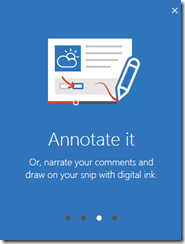 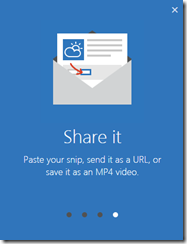 How to use Snip

How I use Microsoft Snip in the classroom

First of all I downloaded it on to all the school computers. It sits in the middle of the screen waiting for instructions.

a) Sometimes when the students have completed their task for the lesson they use Snip to capture a screenshot of their finished product.  Then they annotate on the screenshot to give the context of the Snip.

b) Sometimes, with their  screenshots, they record audio over them explaining what they did.

There is a lot of potential for using Snip in the classroom.