The Microsoft in Education Global Forum recognizes and celebrates the achievements of educators who are preparing students for life in the 21st century. Each year, the Microsoft in Education Global Forum brings together participants from the Microsoft Innovative Educators Program and the Microsoft Innovative Schools Program for an energetic, collaborative conference. This year the Global Forum took place in Barcelona, Spain between 11 and 14 March 2014. The Forum was attended by more than 1000 of the world’s most innovative educators, school leaders, and education leaders from 75 countries including fourteen delegates from South Africa and Lesotho.

The South African and Lesotho delegation was made up of the following Innovative School representatives:

The school leaders, ICT coordinators and teachers who participated in this track enjoyed learning more about the innovative teaching practices deployed at the various schools. We were especially proud of Paul Cassar who this year was asked to serve as a mentor to other schools participating in the program for the first time. We believe that Paul’s experiences at Eunice are an example of how much can be achieved at a public African school when there is a committed leader at the helm, supported by passionate staff. An exciting component of this track was the Pitch Competition where schools were invited to pitch their idea for using ICT to enhance education to a panel with a view of possibly being awarded funding to make their dream a reality.

The following teachers were each invited to present their projects in the Innovative Teacher Track. To make it to the Global Forum these teachers uploaded a Learning Activity and Innovative Educator Application to the Partners in Learning Network and their projects were judged to be among the best of those submitted by teachers in the Middle East and Africa region:

Tlali Mabusane of Matikoe High School in Lesotho presented his project entitled “Sustainable Crop Production: Going Green” . In this project, Mabusane’s learners used a variety of ICT tools to study and share ideas for sustainable crop production. Group members played different roles as they collected, analyzed and presented data and made use of a variety of communication methods including a blog and Facebook to collaborate.

Phuti Ragophala, Principal of Pula Madibogo Primary School in Limpopo presented her project on “Planting Seeds! Changing Lives!”  The goal of this project was for learners to gain life skills and indigenous knowledge that they could use to ensure food security both in their community now and in the future.

Cheryl Douglas of Bishops and the Teaching Biology Project NGO in the Western Cape presented her project entitled “Human Impact on the Environment” This project involved running a mini conference to introduce 50 teachers to a new section of the curriculum; pairing learners from 12 schools to go on field trips to investigate human impact in various sites in the City of Cape Town; and then creating videos to share findings. At the gala awards evening Cheryl was awarded a prize for being the second runner up in the “Educator as Change Agent and Innovator Category”.

All members of the South Africa and Lesotho delegation agreed that the Global Forum was a once in a lifetime opportunity to network with teachers from around the world, to see cutting edge projects and to be inspired by keynote speeches and the technology showcase. An activity that was especially enjoyed by teachers in the group was getting to work in teams of five or six teachers from around the world to produce a project that would address one of the United Nations Millennium Development Goals as part of a 24 hour Learn-a-Thon. Cheryl Douglas was part of a group that came up with an exciting way of collaborating to address the issue of Poverty which received the “Runner-Up Learn-a-Thon Prize” at the gala awards evening. For all though, the real prize was the opportunity to build relationships with teachers from around the world whilst working on a shared challenge. We look forward to seeing some of the exciting ideas that were generated here being implemented.

Judges at the Global Forum

For this Global Forum there were one hundred judges, including the following three judges from South Africa:

The judges participated in a Judging Workshop to familiarise themselves with the judging rubric and process for judging as part of the Forum. In addition to reviewing the Learning Activities that were assigned to them on the Partners in Learning Network, judges interviewed each of the teachers that they had been assigned to ask them in-depth questions about their projects. When they weren’t judging projects, the judges were part of the Education Leaders Briefing. This session gave delegates an opportunity to network with key leaders in the field of ICT in Education from a range of countries and to share their experiences.

Also in the South African delegation was Angela Schaerer – Academic Programme Manager for Microsoft South Africa who kept the team together and Theo Garrun – Editor of The Star Workplace who will be covering this conference in the press.

All members of the South African and Lesotho delegation were grateful to Microsoft for the opportunity to attend the Forum – a professional highlight for many in the group. The group was also grateful to SchoolNet SA for making their travel arrangements and assisting in getting their entries ready for judging. Teachers who are interested in being part of the next Microsoft in Education Global Forum should sign up as members of the Microsoft Partners in Learning Network (www.pil-network.com) to find out more details about the next Forum when these are released.

For more information on Cheryl Douglas’s award winning “Human Impact on the Environment” project please see the detailed overview below: 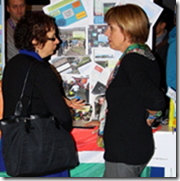 In her project, Cheryl worked City Of Cape Town to introduce teachers to a new section of the Gr 11 Biology curriculum: Human Impact on the Environment by running a one day mini conference for 50 teachers to explain the new content which looks at human impact on water quality and availability, loss of biodiversity, waste management, food security and atmosphere and climate change. Teachers from 12 schools chose to become involved in a pilot project where their students could research real world issue and come up with recommendations. Schools were partnered and each pair of schools (involving 3-6 students per school) were taken on a different outing to places including a landfill site, urban farm, activities along an urban river, and a nature reserve in the middle of the city. Schools were shown how to share their finding using Skydrive and Facebook groups with the aim of presenting their findings in a video. Schools were encouraged to meet in their groups and to use social media to communicate. Many elected to go on additional field trips to learn more about their topic. At the 2nd Saturday afternoon workshop they were encouraged to write a script, plan a storyboard and name their photos logically and shown how to use Moviemaker. They then went away, made their video and at 3rd workshop finalised their videos and uploaded it onto YouTube at our school as many of the students and schools do not have Internet access. The videos were put onto the Youtube BiologyZA playlist ( please subscribe) and onto a webiste (http://learning.bishops.org.za/humanimpact/) and this were shared via listserves and social media to Biology teachers community in SA and via the South African Institute of International Affairs to a more global platform. Groups presented their videos and answered questions about their understanding of the problem and feasible solutions to over 100 parents, teachers and representatives of the City of Cape Town. All students involved went on a one day leadership training day where they looked at systems thinking, worked on an urban farm and in completely mixed groups from all the schools took part in a ‘Masterchef challenge” where they made healthy organic sandwiches! The project ran over 6 months.”