A number of schools in KwaZulu-Natal have been visited to encourage teachers to sign up for the Partners in Learning Network, known as the Microsoft Educators Network form 2014 (see www.pil-network.com). SchoolNet SA’s two KwaZulu-Natal based trainers have also made an effort to encourage teachers to sign up during other training sessions. Some of these sessions are described below:

Isibongo Primary School received nine tablets for participating in the Touchable Earth project in 2012. SchoolNet ran a Journey with Tablets course for teachers at this school on 2 May 2013 to help show staff members how to use the tablets in the classroom. One of the sessions included using e-mail and most of the teachers had no e-mail account. One the teachers had signed up for email they discussed the benefits of email. One advantage that was raised was being able easily sign up for other Professional development networks and to stay connected. This led to an introduction to Partners in Learning Network as one of the professional development websites worth joining as a teacher.

Thembelihle Primary school bought laptops for the teachers and other computer hardware in May 2013 and SchoolNet offered an Intel Getting Started course. The session started off with the principal sharing how some teachers are already using technology in the classroom. This sharing prompted the facilitator Hlengiwe Mfeka to tell the group about Partners in Learning Network where teachers could access more exciting tools. Teachers were assisted to join and a number of teachers showed interest in entering the ‘Expert Educator’ competition.

An appointment to do a Partners in Learning Network demonstration was set with this school for 21 May 2013. The school adjusted the periods and the School Management Team showed much enthusiasm for this session. Some of the teachers at the school are still technophobic, but many were excited by the resources on offer. A follow-up session will be done to find out if teachers managed to sign up on their own and to give support where necessary.

The principal was very excited to learn about the Partners in Learning Network and other opportunities available for teachers during a telephone conversation and agreed to a Partners in Learning demo on 3 June 2013. After the presentation teachers asked lot of questions regarding the ‘Expert Educator’ competition e.g. Does the competition include Primary Schools? What if the teacher doesn’t have ICT skills but interested in entering? They were so motivated such that they took out their cellphones and requested assistance to sign up however the network/reception was very weak and teachers then promised to join from home.

The visit to this this school on 4 June 2013 included meeting with the School Management Team to discuss the upcoming Intel Elements Collaboration workshop as well as a presentation on the PiL Network. One teacher stood up and commented on how the group was motivated and looking forward to engaging with the tools. The teachers who had to leave due to prior commitments promised to register during the holidays.

On 5 June 2013 the Hlengiwe Mfeka arrived at this school to find a staff room packed with all 26 staff members who had been “promised something good” by their principal who had been briefed about the Partners in Learning Network on the phone. Teachers shared interesting stories about professional networks that they belong to and saw the value of joining the PiL-Network. The principal asked a lot of questions and said that he hoped that this session would be the start of a good relationship between this school and SchoolNet. As this school has a good computer lab and offers CAT as a subject the trainer was sure the resources would be put to good use.

On 30 April and 1 May 2013, Nomty Gcaba provided one-on-one instruction to teachers at this school who used their free periods to learn more about the PiL Network. Educators enjoyed the presentation and were interested in the free tools and discussion forums. 26 educators registered using the trainer’s laptop and others will register once the school’s internet is fixed. A number of educators did not have email addresses; and this session gave them an opportunity to create these.

13 teachers attended this demo on 7 May 2013. Unfortunately the school’s internet access was very slow but a number of teachers signed up using their cell phones and others used trainer Nomty Gcaba’s computer to register. Educators were very interested in the resources available and mentioned different ways of how they thought they would be able to use the PIL network.

On 9 May 2013, 20 teachers attended a Partners in Learning Network demo. Educators were especially interested in software that could help their learners. They had an opportunity to use Maths Generator and also downloaded some other software to try out. Educators hope to explore more and expressed interest in the innovative lessons that are posted on the website. The internet was fast at this school and most educators had good computer skills which made facilitating this session a pleasure.

The Microsoft in Education demonstration at Delani Primary School was disturbing. Firstly the educator planning the session did not know whether or not the computers were working but assumed that they were because they were new laptops. On the trainer’s arrival the laptops were still inside the trolley box and not charged. The trainer was the first to make use of the devices and some teachers were also able to register from their phones. Thirteen teachers attended this session on 16 April 2014.

This Microsoft in Education demonstration was a great success. The laptops were ready for use and the internet worked. Educators took the session seriously and asked questions on different tools that were discussed. After the session most of them joined the Microsoft in Education network and started downloading different tools. They also joined the SchoolNet membership programme. This session took place on 22 April 2014 and was attended by 25 educators. 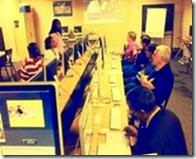 Twenty educators attended this session that took place on 25 April 2014. The internet was working very well and some educators had already joined the Microsoft Educators Network. The trainer had an opportunity to talk about SchoolNet and the courses on offer. She then discussed the Microsoft in Education network and asked educators to comment on the tools and gave them the opportunity to try some of the tools. Educators were concerned that most tools are supported by Windows 8 as some of the computers at the school have Windows 7. The principals told them that all new laptops will have Windows 8.

This subject advisors workshop took place on 5 and 6 May 2014 and involved a total of 57 participants. In both cases the sessions took longer than scheduled as the delegates were eager to stay on to download tools and to practice using them. The event organisers thanked Microsoft and SchoolNet for the opportunity and said that the subject advisors who had attended the event would work with schools in their districts to expose them to the Microsoft Educators Network.

The Microsoft Educators Network demonstration for Eden College took place on 19 May 2014 and was attended by 32 teachers in two groups. Both groups were very interested and looked forward to the presentation. Most of them had already registered the day before and others registered on the same day. All educators were comfortable with internet and computers which made it easy for them to try different tools. Educators tried different tools and some complained that Fresh Paint demanded that they have a Microsoft email address. Educators from primary schools liked using fresh paint and they looked at the activities for educators using fresh paint. AutoCollage and Math Worksheet Generator were also very popular.

If you have not yet joined the free Microsoft Educator network, please go to http://www.pil-network.com/ and register. You’ll be amazed at all the useful resources you’ll fidn at your disposal.